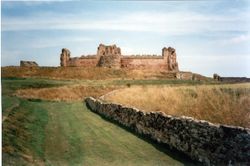 He was seen as the product of incest as his mother was the widow of Earl William's wife's brother, Thomas, 13th Earl of Mar.

Earl William's legitimate wife Margaret of Mar had already produced an heir for her Lord in 1358, James, 2nd Earl of Douglas and Mar inherited upon his father's death in 1384

In 1389, Margaret of Angus relinquished her title in favour of her son, but he did not assume it until his betrothal in 1397 to the princess Mary, daughter of King Robert III. Margaret of Angus' influence must have been considerable- in addittion to obtaining a royal bride for her illegitimate son, she persuaded King Robert to confirm him in his style of Earl of Angus, and also to bestow upon him the lordships of Abernethy, (Perthshire) and Bonkill, (Berwickshire); and "to endow him and his spouse with the justiciary fees of the County of Forfar, to ratify all gifts, entails, and leases made or to be made by Isabel, Countess of Mar, to the said Jorge her brothir" -(Maxwell).

James 2nd Earl of Douglas, was killed without issue in 1388, at the Battle of Otterburn, and the Earldom of Mar, and all non-entailed Douglas possessions passed to his sister Isabel. The earldom of Douglas passed to a cousin, a bastard son of The Good Sir James Douglas, the aptly named Archibald the Grim.

The descendants of Archibald formed the famed Black line, and those of George the equally famed and longer lived Red Line.

Angus does not appear to have taken much interest in Public life, although his name appears on various minor charters. In 1402 however, he was dispatched under orders of the Duke of Albany, Regent of Scotland to accompany Murdoch, Earl of Fife and the Earl of Moray to assist the Earl of Douglas during his invasion of Northumberland. That incursion ended at the disastrous field of Homildon Hill, where the Scots were routed and all of the above taken prisoner. Both Moray and Angus died of the Plague whilst captive.


Issue
By his wife, Princess Mary of Scotland, a daughter of King Robert III, Angus had two children:

William Douglas, 2nd Earl of Angus(1398-1437)
Elizabeth Douglas
m1 Sir Alexander Forbes, later Lord Forbes
m2 Sir David Hay of Yester
Princess Mary was to marry a further five times and bear five more children by three of these husbands. The issue by her second husband, Sir James Kennedy younger of Dunure, were the ancestors of the Marquesses of Ailsa; The product of her second marriage to William, 1st Lord Graham were the ancestors of the Viscounts Dundee and the Dukes of Montrose.