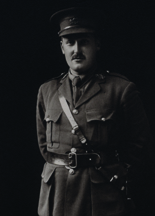 On 2nd February 1917 orders were issued to establish a line of pickets extending from Kala-Haji-Fahan north-west to the River Tigris in the Dahra bend.
During these operations, 2nd Lt Baines was killed. His body was never identified or removed from the battlefield and he is commemorated on Panel 17 of the Basra Memorial.