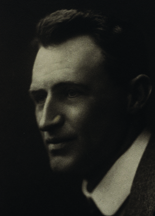 'He was a boy of considerable ability with tastes out of the common. His health prevented him from gaining any prominence in out-of-door pursuits, but his quick humour and merry disposition gained him many friends. After a not undistinguished career at Cambridge, he was called to the Bar, but devoted all his energies to philanthropic work at Cambridge House, Camberwell, for some years. On the outbreak of the war he enlisted in the Coldstream Guards, and finished a three months' recruits course; he then accepted a commission in the 10th Yorkshire Light Infantry, and was promoted Captain last August before the Battalion embarked. He was killed in Flanders on February 20th.' (Malvernian, Mar 1916).