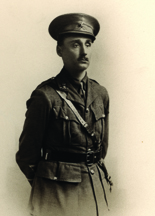 'All through his school career he showed remarkable vigour and keenness in all that he did. He was of an independent nature with a strong sense of duty, and he did his work as a House Prefect in a conscientious, straightforward manner. He was looking forward to taking Holy Orders. He left Oxford in June 1914, and shortly after the outbreak of war he received a commission in the 6th Royal West Kent Regiment. He was killed in France on Sept. 17th, aged 25.' (Malvernian, Nov 1915).