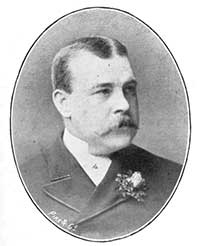 
Barnby Manor:
The residential property and estate was sold by auction in 1879, the residential property and some of the land to Mr Frederick Platt. The auction was held in the Town Hall, Newark on Wednesday the 29th day of October 1879 at three, for four o’clock, in twenty four lots containing the manor, compact farms, with excellent farmhouses and buildings, three cottages, accommodation closes and building sites and a blacksmith’s shop - ‘the whole offering most attractive and desirable investments’.
‘The residence, which was erected 25 years ago and built upon a gravely subsoil with white brick made on the estate, is pleasantly situated close to the Newark and Sleaford Road and approached from the north by a carriage drive to the south east front, and entered under a portico. The ground floor comprises a dining room, with east and south aspect; a well proportioned Drawing Room, with south aspect; a library or breakfast room, lighted from the southeast; smoking room and gun room, both looking into the garden but shut off from the entrance hall, which is lighted from the roof; also a bath room or dressing room, a store room, Butler’s pantry, kitchen, scullery, laundry, brewhouse, larders, pantries, courtyard, and other convenient offices. From the entrance hall a stone staircase leads to the principle bedrooms and dressing rooms, which are well lighted and conveniently arranged.’
When sold the estate also contained 1,260 acres of excellent grass, arable and wood lands. Mr Frederick Platt remodelled and rebuilt the mansion in an Elizabethan style.
http://www.barnby-in-the-willows.org.uk/Barnby%20Manor.htm