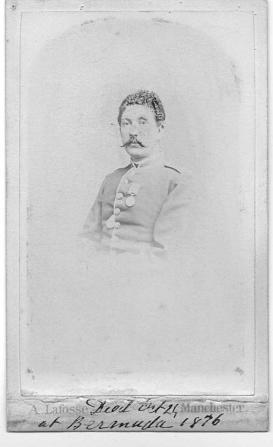 He then joined the army and served in the 97th Regiment, which included time in India where he was awarded the Indian Mutiny Medal.
The 97th regiment arrived in Bombay in November 1857. In April 1858 they joined the British forces that lifted the Siege of Lucknow.

Prior to the Indian Mutiny, The 97th Foot was involved in the Crimean War. The regiment landed at Balaklava on 20 November 1854. They took part in the Siege of Sevastopol and the Battle of the Great Redan. The regiment suffered heavy casualties, with two members subsequently being awarded the newly created Victoria Cross in 1857. Following the end of the Crimean war, the 97th Regiment returned to England, arriving in July 1856 before shortly departing a year later for the Indian Mutiny.

According to the muster rolls (WO 12/9706), a William Evans (Regt no 576) joined the 97th regiment on the 10th October 1859 as a Private from England, and thus it does not look like he served in the Crimean War and had a limited part in the Indian Mutiny as it was largely over by October 1859.
At that time the 97th Foot included 43 Officers (a large number of whom were on leave in England including their Colonel H. A. Proctor), 54 Sergeants, 48 Corporals, 21 Drummers and Fifers, and 915 Privates bringing the total to 1038.

Afer serving with the regiment for fours years, principally in Jubbolpore, India, William Evans left the regiment on the 12th December 1863 and embarked for England along with several other Privates. (WO 12/9710).

The 97th remained in India until 1867, where they then returned to the United Kingdom, spending six years at various stations in England and Ireland.

It seems that in Janaury 1869 William Evans was re-engaged as a Private.
On 1st February 1870 he was promoted from a Private to a Corporal and served as a guard in Dover for the rest of 1870.

From March to December 1871 he was in Mullingar, Ireland.

From 1st January to 14th February 1872 he was on Furlough (military leave).

On March 5th 1873, he was court martialled for being drunk resulting in being reduced to a Private, 5 days in confinement and in miliary prison until 9th April 1873 where his good conduct pay was forfeited.

On 19th May 1873, he embarked for the West Indies with his Regiment spending the rest of 1873 in Barbados, where he received an additional 2d per day Good Conduct Pay on top of the 1 shilling and 3d standard Regimental pay.

On 11th April 1874, he was again court martialled for being drunk resulting in a fine of 10 shillings and military prison in Barbados until the 3rd July 1874.

Sometime between January and March 1875 he was on board ship for 9 days (probably from Barbados to Bermuda) with rest of Regiment.

William Edward Evans died on the 25th October 1876 while in Bermuda.


His Captain wrote the following letter to his mother:
Halifax, Nova Scotia
June 25th 1877
Dear Mrs Evans,
I was captain of your son's company of the 97th Regt at Ireland Island, Bermuda where he died. He had been well and strong to all appearances, until he one day went to hospital and soon afterwards, that is to say in two or three days, I learnt that he was dead. He died without pain I believe.
We were all most sorry for him as he was a general favourite with the officers and uniformly a well conducted man.
I should have communicated with you before had I known your address. He left nothing but his medal for the Indian Mutiny in which I believe he did good service. If you wish to get this as a memento of him, you should apply to the Under Secretary for War, Horse Guards, War Office, London SW.
If you wish to learn anything more, apply to Captain Belgrave, 97th Regiment, Halifax, N.S.

Jan-Mar 1875, Bermuda, on board ship for 9 days (prob from Barbados to Bermuda) with rest of regiment. 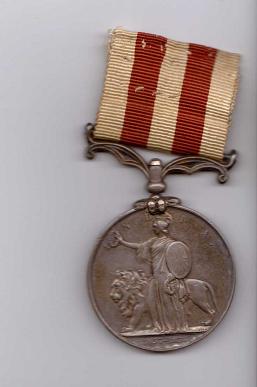 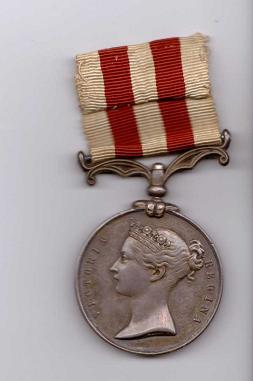 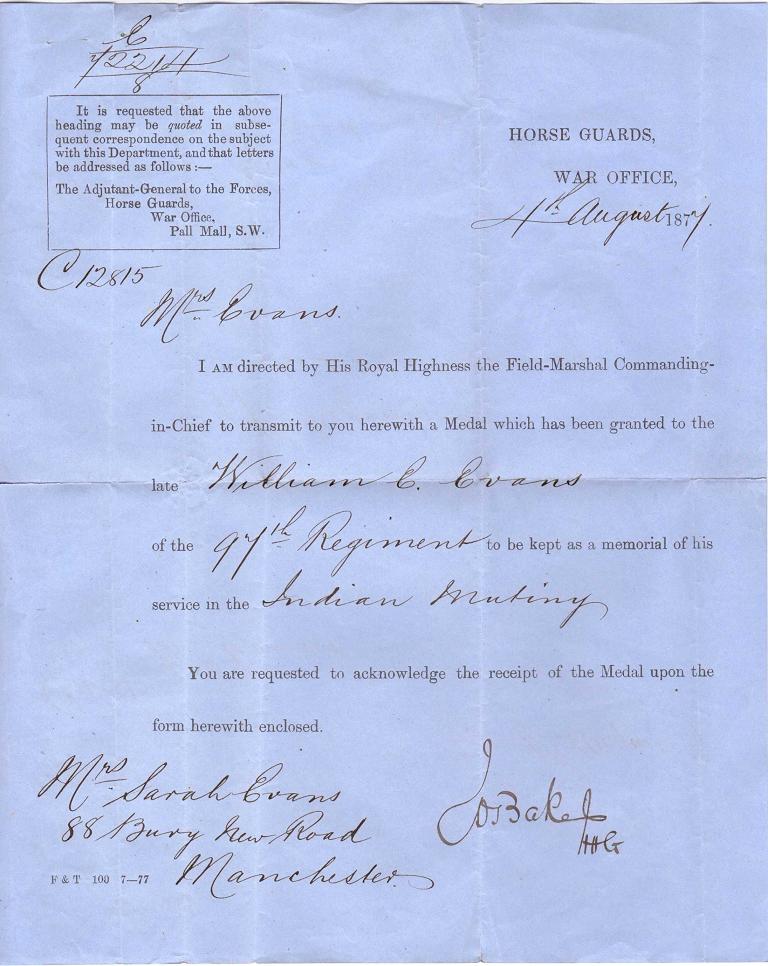 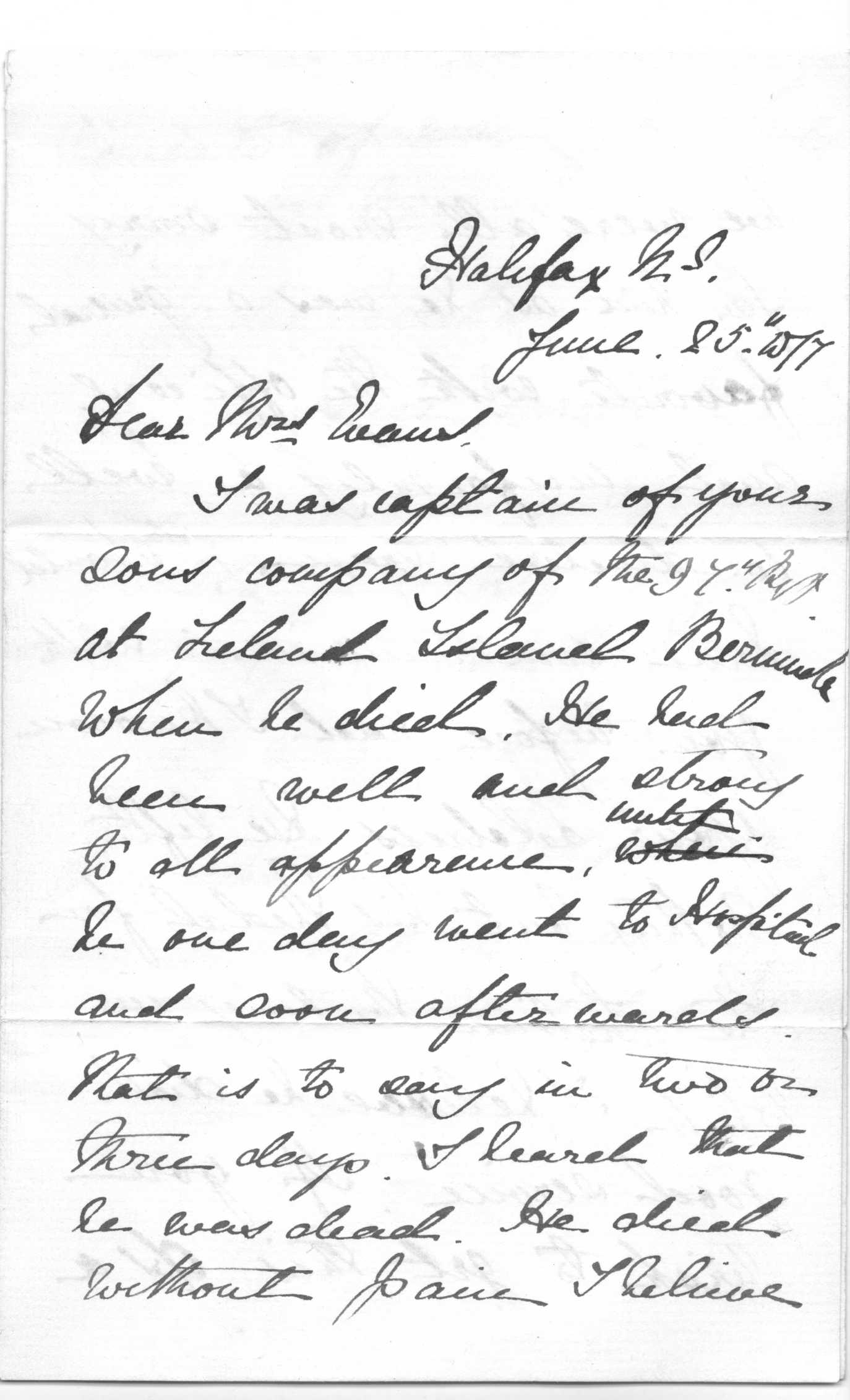 Letter From His Captain Re Death In Bermuda in 1876 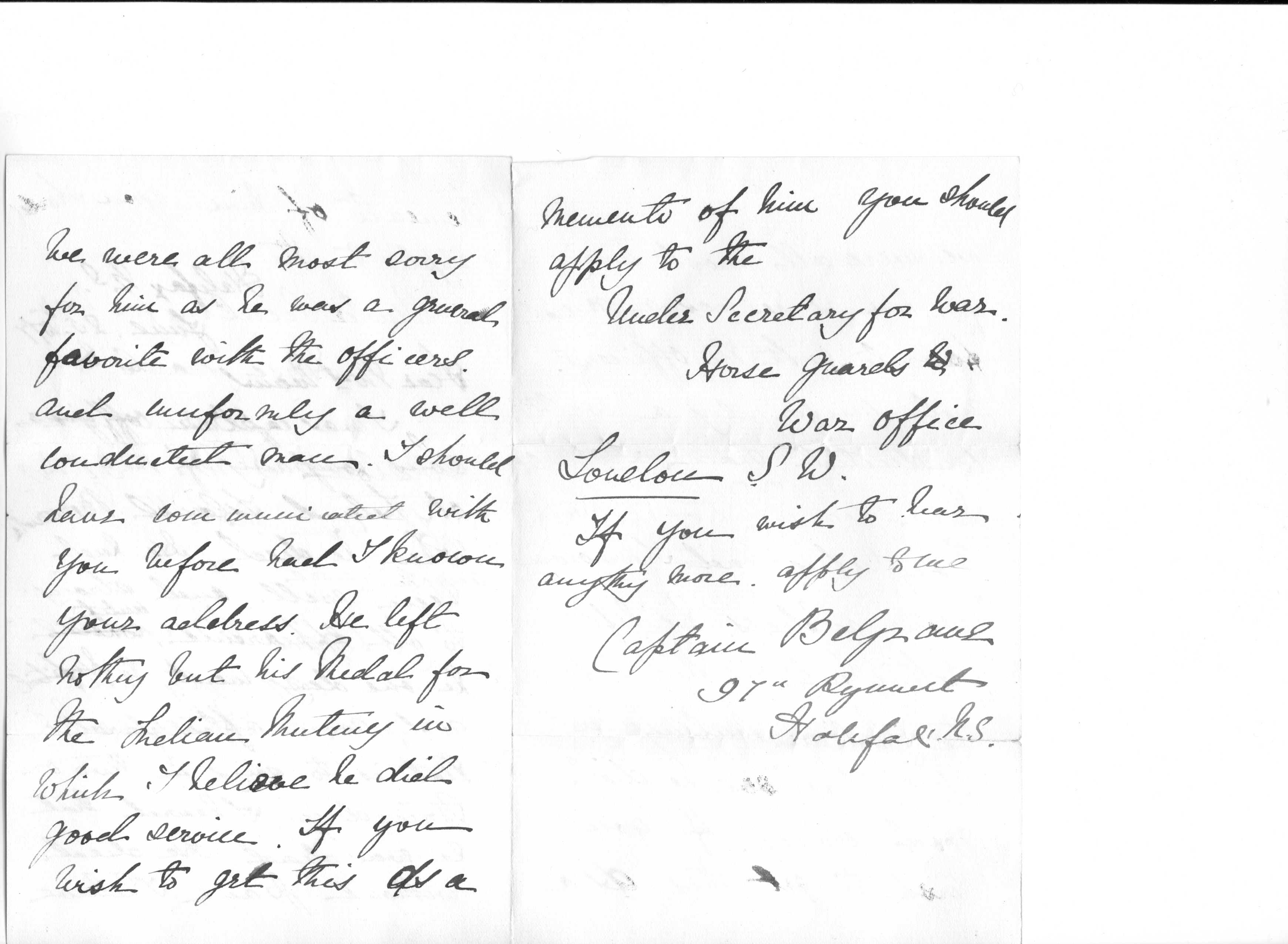 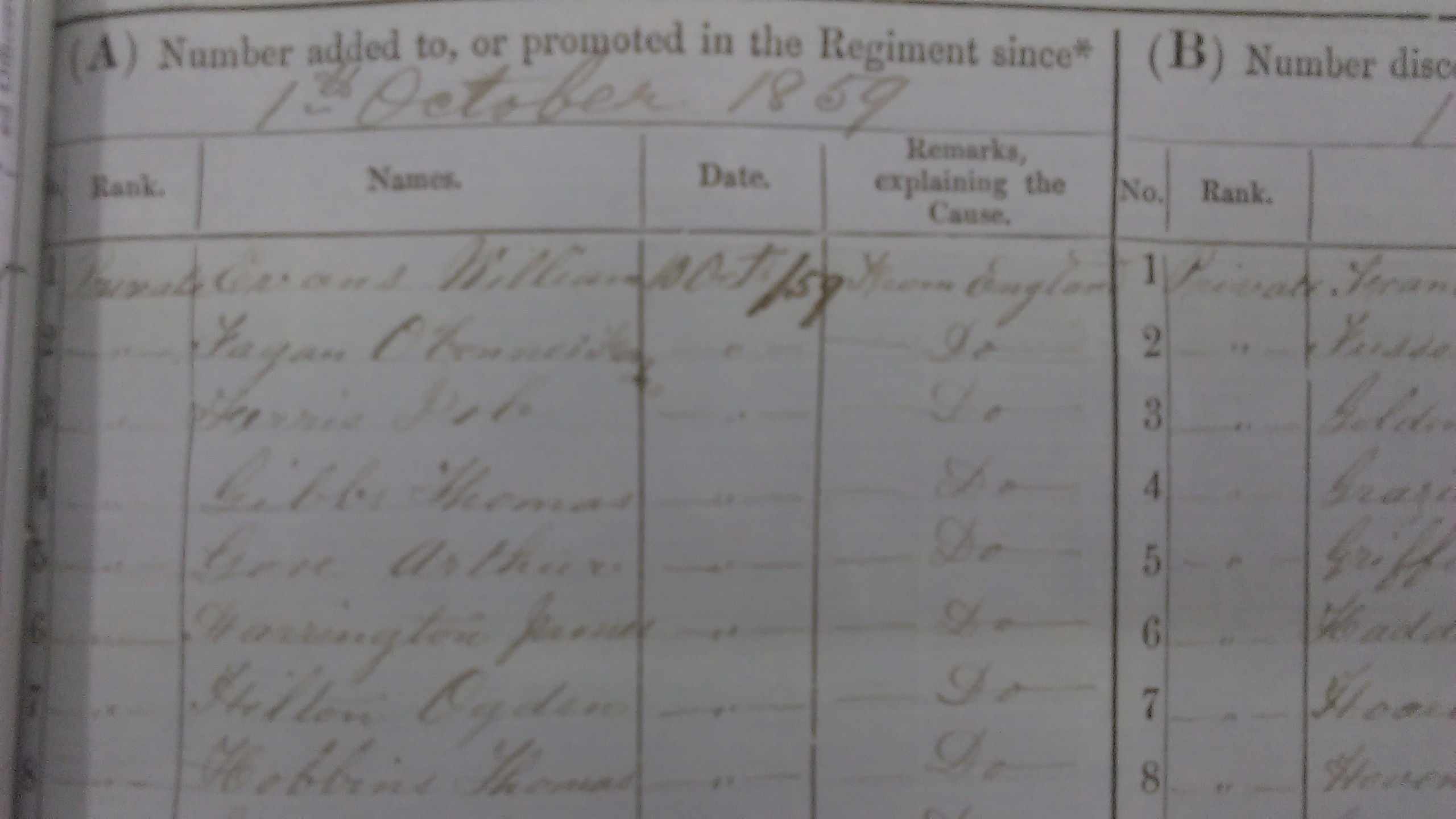 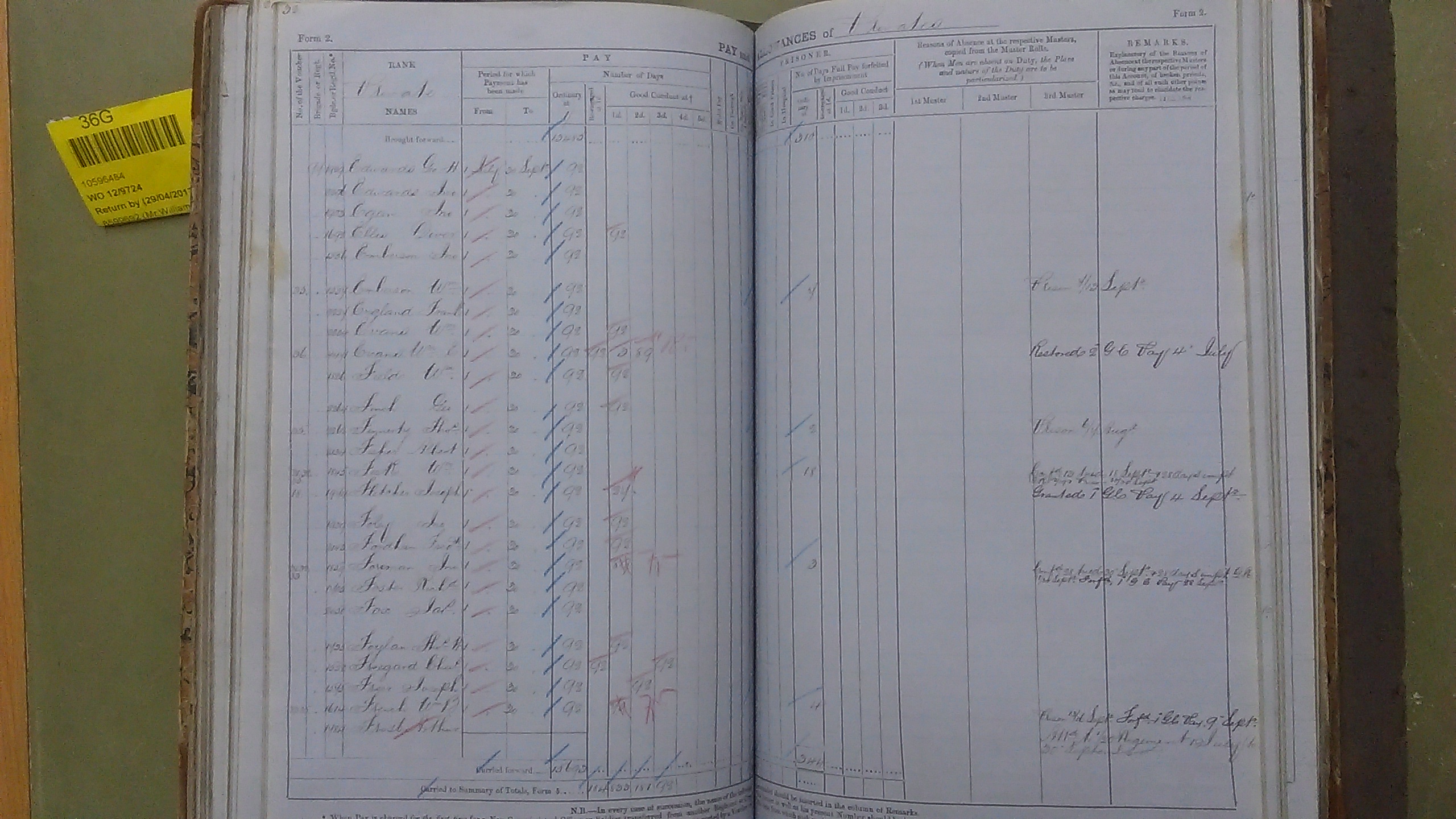 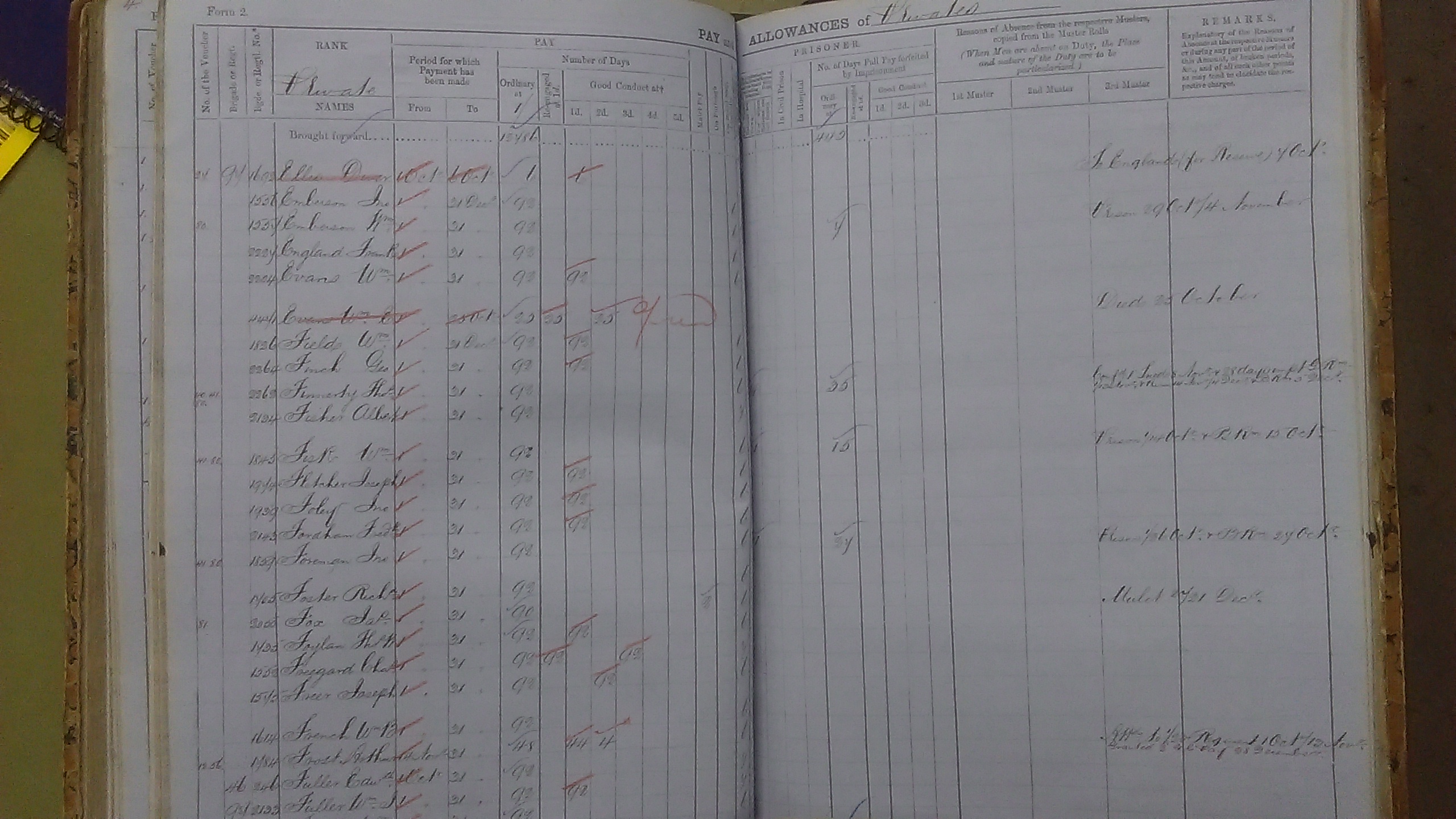