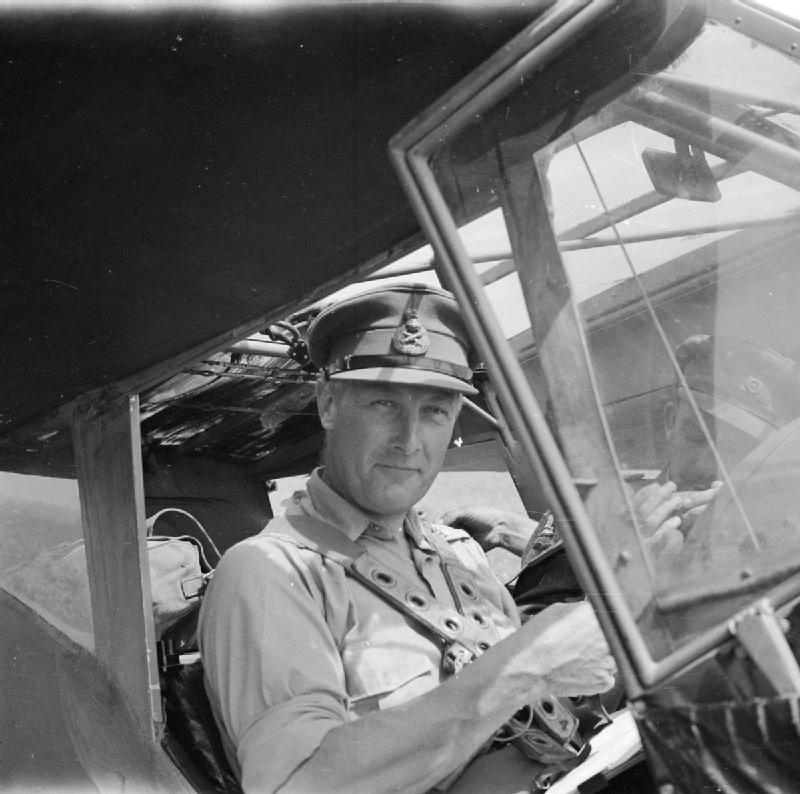 Lt Gen Kenneth Anderson in an aircraft, Thibar, Tunisia, 2 May 1943
Name:
Kenneth Arthur Noel Anderson
Determine relationship to...
Birth:
25 DEC 1891 Madras, India
Father:
A Anderson
Mother:
C Duff
Christening:
4 FEB 1892 Dharwar, , Maharashtra, India
Married:
Kathleen Gamble 1918
Children:
Death:
29 APR 1959 Gibraltar aged 67
Remarks:
General Sir Kenneth Arthur Noel Anderson, KCB, MC (December 25, 1891 – April 29, 1959) was a British Army officer in both the First and Second World Wars. He is mainly remembered as the commander of the First Army during Operation Torch, the Allied invasion of Tunisia. He had an outwardly reserved character and did not court popularity either with his superiors or with the public. Eisenhower wrote that he was "blunt, at times to the point of rudeness". In consequence he is less well known than many of his contemporaries. He handled a difficult campaign more competently than his critics suggest, but competence without flair was not good enough for a top commander in 1944.[1]


Early life and World War I
Anderson was born in India, the son of a Scottish railway engineer, and was educated at Charterhouse School and the Royal Military Academy Sandhurst before being commissioned in the Seaforth Highlanders in September 1911 as a second lieutenant.[2] His First World War service was in France, where he served with distinction. He was awarded the Military Cross for bravery in action and was wounded at the Battle of the Somme on the opening day, 1 July 1916. The citation read:

For conspicuous gallantry. Captain Anderson was severely wounded in front of an enemy first line trench. He endeavoured to struggle on, but progress was impossible as one of his legs was broken. Nevertheless, although exposed to heavy fire, he continued to direct and encourage his men.[3]

He took eighteen months to recover from the wounds he received, before rejoining his regiment in Palestine in time to celebrate victory. He was appointed an acting major in May 1918[4] and reverted to captain in July 1919.[5]

In 1918 Anderson married Kathleen Gamble. She was the only daughter of Sir Reginald Arthur Gamble and his wife Jennie. Her brother was (Acting) Captain Ralph Dominic Gamble MC, Coldstream Guards.

Inter-war career
His inter-war career was active, he served as adjutant to the Scottish Horse from 1920-24[6][7] and was promoted to major during this posting.[8] He attended the Command and Staff College course at Quetta, where he apparently did not do that well. His superior, Major-General Sir Percy Hobart, thought it "questionable whether he had the capacity to develop much." Other staff council also had reservations, but "hoped that he might suffice."[9] Anderson graduated from the Staff College, Camberley, in 1928 following which he took a staff posting (GSO2) in the 50th (Northumbrian) Division.[10] In 1930 Anderson was promoted lieutenant-colonel[11] and at the age of 38 he commanded the second battalion of the Seaforths in the North West Frontier, for which he was mentioned in dispatches and as a full colonel[12] went on to command the 152nd (Seaforth and Cameron) Infantry Brigade in August 1934.[13] Still as a full colonel in March 1936 he was appointed to a staff job (GSO1)[14] in India and in January 1938 was appointed acting brigadier to command 11th Brigade[15] which he trained hard, despite inadequate equipment.

World War II
It was as commander of 11th Brigade that Anderson saw service with the British Expeditionary Force. When Montgomery was promoted to command II Corps during the evacuation from France, the departing II Corps commander Alan Brooke chose Anderson to take command of Montgomery's 3rd Infantry Division.[16]


Anderson (right) on a visit to forward divisional headquarters in Tunisia, January 1943.On returning to the United Kingdom after the withdrawal from Dunkirk Anderson was promoted to major-general, and made a Companion of the Order of the Bath (CB).[17] He was given commanded of 1st Division[16] which was tasked with defending the coast of Lincolnshire before being promoted to lieutenant-general in 1941[18] and given VIII Corps, then II Corps to command before becoming GOC-in-C Eastern Command in 1942.[16]

In spite of his lack of experience in commanding larger formations in battle Anderson was given the First Army command during Operation Torch in November 1942 because the first two choices, Harold Alexander and Edmond Schreiber, were unavailable.[citation needed] Alexander had been appointed Commander-in-Chief Middle East and Schreiber suffered from poor health. Anderson's force advancing into Tunisia from Algeria was initially barely a division strong and was engaged in late 1942 in a race to capture Tunis before the Axis were able to build up their forces and launch a counterattack. This was unsuccessful although elements of his force got to within 10 miles of Tunis before being pushed back.

As further Allied forces arrived at the front they suffered from a lack of co-ordination. Eventually in late January 1943 Eisenhower persuaded the French to place their newly-formed XIX Corps under Anderson's First Army and also gave him responsibility for the overall "employment of American troops" specifically the US II Corps, commanded by General Lloyd Fredendall. However, control still proved problematical with forces spread over 200 miles (320 km) of front and poor means of communication (Anderson reported that he motored over 1,000 miles (1,600 km) in four days in order to speak to his corps commanders).[19] Anderson and Fredendall also failed properly to coordinate and integrate forces under their command.[20] Subordinates would later recall their utter confusion at being handed conflicting orders, not knowing which general to obey - Anderson, or Fredendall.[20] While Anderson was privately aghast at Fredendall's shortcomings, he seemed frozen by the need to preserve a united Allied front, and never risked his career by strongly protesting (or threatening to resign) over what many of his own American subordinates viewed as an untenable command structure.[citation needed]

II Corps later suffered a serious reverse at the Kasserine Pass, where Field Marshal Rommel launched a successful offensive against Allied forces, first shattering French forces defending the central portion of the front, then routing the American II Corps in the south. While the lion's share of the blame fell on Fredendall, Anderson's generalship abilities were also seriously questioned by both British and Allied commanders.[16][21][22] When Fredendall disclaimed all responsibility for the poorly-equipped French XIX Corps covering the vulnerable central section of the Tunisian front, denying their request for support, Anderson allowed the request to go unfulfilled.[21][23] Anderson was also criticised for refusing Fredendall's request to retire to a defensible line after the initial assault in order to regroup his forces, allowing German panzer forces to overrun many of the American positions in the south.[21] Furthermore, the commander of US 1st Armored Division vehemently objected to the dispersal of his division's three combat commands on individual assignments requested by Anderson which he believed diluted the division's effectiveness and resulted in its heavy losses.[21][24]

In particular, the American generals Ernest N. Harmon and George S. Patton thought little of Anderson's ability to control large forces in battle.[24][25][page needed] Major-General Harmon had been in Thala on the Algerian border, witnessing the stubborn resistance of the British Nickforce, which held the vital road leading into the Kasserine Pass against the heavy pressure of the German 10th Panzer Division, which was under Rommel's direct command.[24] Commanding the British Nickforce was Brigadier Cameron Nicholson, an effective combat leader who kept his remaining forces steady under relentless German hammering. When the U.S. 9th Infantry Division's attached artillery arrived in Thala after a four-day, 800 miles (1,300 km) journey, it seemed like a godsend to Harmon. Inexplicably, the 9th was ordered by Anderson to abandon Thala to the enemy and head for the village of Le Kef, 50 miles (80 km) away, to defend against an expected German attack. Nicholson pleaded with the American artillery commander, Brigadier General S. Leroy Irwin, to ignore Anderson’s order and stay.[24] Harmon agreed with Nicholson and commanded, “Irwin, you stay right here!".[24] The 9th's artillery did stay, and with its 48 guns raining a whole year's worth of a (peacetime) allotment of shells, stopped the advancing Germans in their tracks. Unable to retreat under the withering fire, the Afrika Corps finally withdrew after dark.[24] With the defeat at Thala, Rommel decided to end his offensive.

As Allied and Axis forces built up in Tunisia, 18th Army Group HQ was formed in February 1943 under Harold Alexander to control all Allied forces in Tunisia. Alexander wanted to replace Anderson with Leese, one of the Eighth Army corps commanders, but Montgomery had been unwilling to release him.[1] Anderson managed to hold on to his position and performed well during the closing stages of the operation, in May 1943 when Allied forces won victory and the unconditional surrender of the Axis forces, 125,000 of whom were German. His rank of lieutenant-general was made substantive in July 1943[26] and he was advanced to KCB in August.[27] Eisenhower, his superior officer, had stated after observing Anderson in action that he "studied the written word until he practically burns through the paper"[22][28], but later wrote of him that he was

a gallant Scot, devoted to duty and absolutely selfless. Honest and straightforward, he was blunt, at times to the point of rudeness, and this trait, curiously enough, seemed to bring him into conflict with his British confreres more than it did with Americans. His real difficulty was shyness. He was not a popular type, but I had a real respect for his fighting heart. Even his most severe critic must find it difficult to discount the smashing victory he finally attained in Tunisia.[16]
Anderson was the first recipient of the US Legion of Merit[29] in the grade of Chief Commander, for his service as First Army commander in North Africa; he received his award on 18 June, 1943.[30]

On his return to Britain from Tunis he was initially given command of Second Army during the preparations for D-Day but the criticisms of Alexander and Montgomery (who in March 1943 had written to Alexander saying "...it is obvious that Anderson is completely unfit to command any army." and later described him as "a good plain cook"[1]) had gained currency, and in January 1944 he was replaced by Miles Dempsey. Anderson was given Eastern Command,[31] widely viewed as a demotion. His career as a field commander was over and his last purely military appointment was as G.O.C.-in-C. East Africa Command.

Post World War II
After the war he was military commander-in-chief and Governor of Gibraltar, where his most notable achievements were to build new houses to relieve the poor housing conditions, and the constitutional changes which established a Legistative Council. He was promoted full general in July 1949[32] and retired in June 1952[33] when he was made a knight of the Venerable Order of Saint John[34] and lived mainly in the south of France. His last years were filled with tragedy: his only son died in action in Malaya and his daughter also died after a long illness. Anderson died of pneumonia in Gibraltar in 1959.