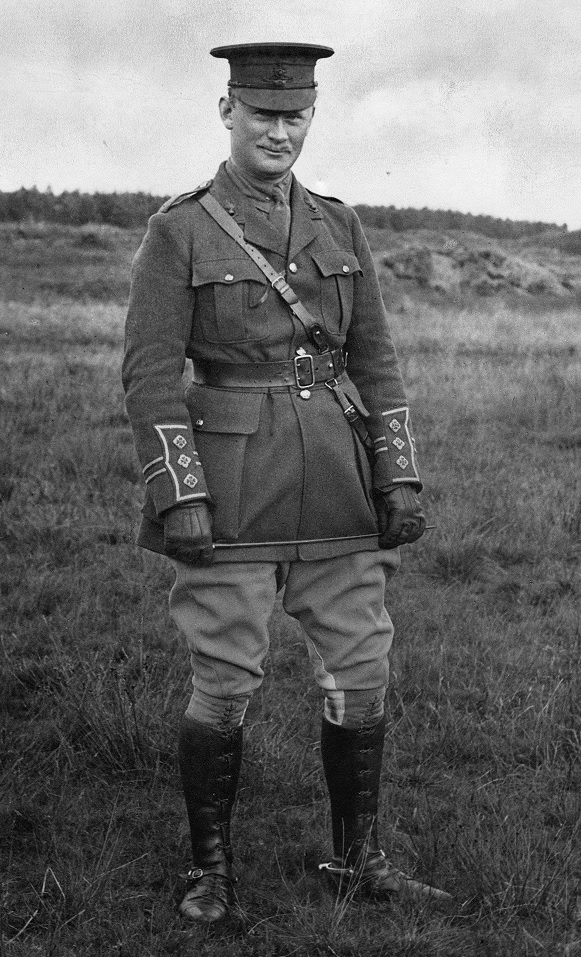 In 1912, he was the Adjutant of the 3rd Northumbrian Brigade

On the 17th April 1915 he entrained along with the 3rd Northumbrian Brigade, at Newcastle upon Tyne arriving at Southampton where they took a ship to Le Havre arriving on the 19th April.

24th May, Battery opened fire against German attack 3am - on zone Menin Road - Stirling Castle - expending 891 rounds.
Owing to short range of guns, battery was well forward of artillery line and when Germans advanced to within 1500 yards, guns were taken out of action and relieved to wagon line having almost exhausted ammunition at 1pm.
Casualties - Wounded Captain & Adjutant S R Radcliffe. 5 gunners.

On the 20th Dec 1916, he filed for divorce as per petition below:
To The High Court of Justice
Probate Divorce

19th to 30th Sep - Registration carried out and the Turk harassed when & where seen.

Nov 3rd - 391 Battery (SR) and 406 Battery (RP) participated in bombardment as per Appendix C. SOS received at 9pm but no serious attack was made by the Turks. 11pm bombardment by 406(RP) until midnight.

Nov 6th - At 11.30pm assisted in general bombardment of Outpost & Middlesex Hill until midnight which were then taken by infantry.

Nov 8th - Turks evacuated Tank Ridge system. F.O.Os (Forward Observation Officers) went over it to a distance of 4 miles North but failed to get in touch with the enemy. Brigade marched at 7pm & bivouacked at ALI BURUALIE.

Nov 13th - Marched & came into action supporting attack of 75th Division on KUSTINEH at 7am. At 1pm shifted position and supported attack on MESNIYEH. Bivouacked at KUSTINEH.
Nov 14th - 7am, Marched down to position a
bout 3 miles North of MESNIYEH covering 233 Infantry Brigade. Hot East wind.

Nov 18th - 9am, 391 & 406 moved out about 1 mile NE to support attack of 4th AMD on LATRON. Attack did not materialise and batteries returned to former bivouack at 5pm.

Nov 20th 6pm, Marched at 6pm in very severe rain & hailstorm for ENAB after going 3 miles were stopped and ordered to bivouack where they were.

Nov 21st, 6am - Continued march on ENAB. At 11am 406 advanced by order of XXI Corps commander & came into actrion about 2 miles further East & for one hour was 1 mile in front of the infantry it was supporting. 391 & 392 Batteries bivouacked at ENAB and 406 on its position.

Nov 24th - Support of attack by 52 Division on Turkish positions commencing at 12.5 pm.

Nov 25th - 2pm 391 & 392 Batteries withdrawn and marched back to Railway Junction arriving there at 8pm.

Dec 19th to 31st Any Turkish movement shelled, all this time the situation was extremely quiet.

9th April - The brigade supported the attack of 232 Inf Brigade as per attached operation order but only phase 1 materialised.

10th April - The bridage supporrted further advance of 232 Inf Brigade but very little further progress was made. The enemy counter attacked in the center at 5pm but was driven off, all batteries succeeding on putting a barrage on him.

The folowing is written on his headstone in Egypt:
Until The Day Dawn
And Shadows Flee away
Pro Patria Mori
(Mrs D Radcliffe, Lechlade Manor, Gloucester)
Source www.cwgc.org

The Imperial War Museum have his picture and description of his service on the back given by his mother.
IWM Catalogue number: Q 36965, PC 645
http://www.iwm.org.uk/collections/item/object/205000408 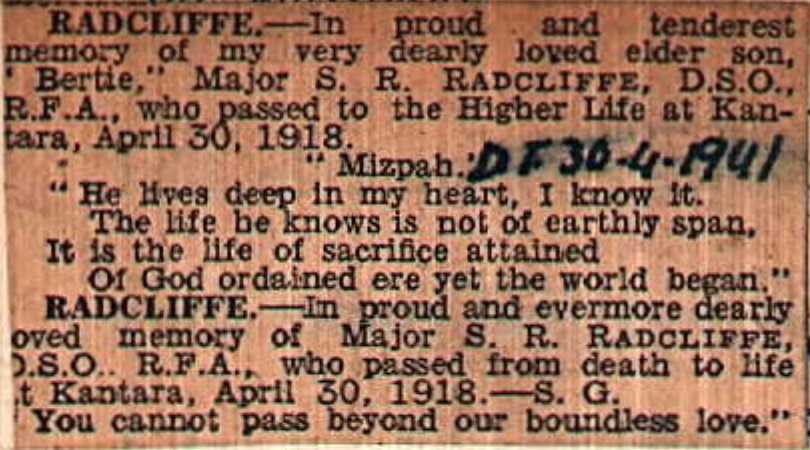 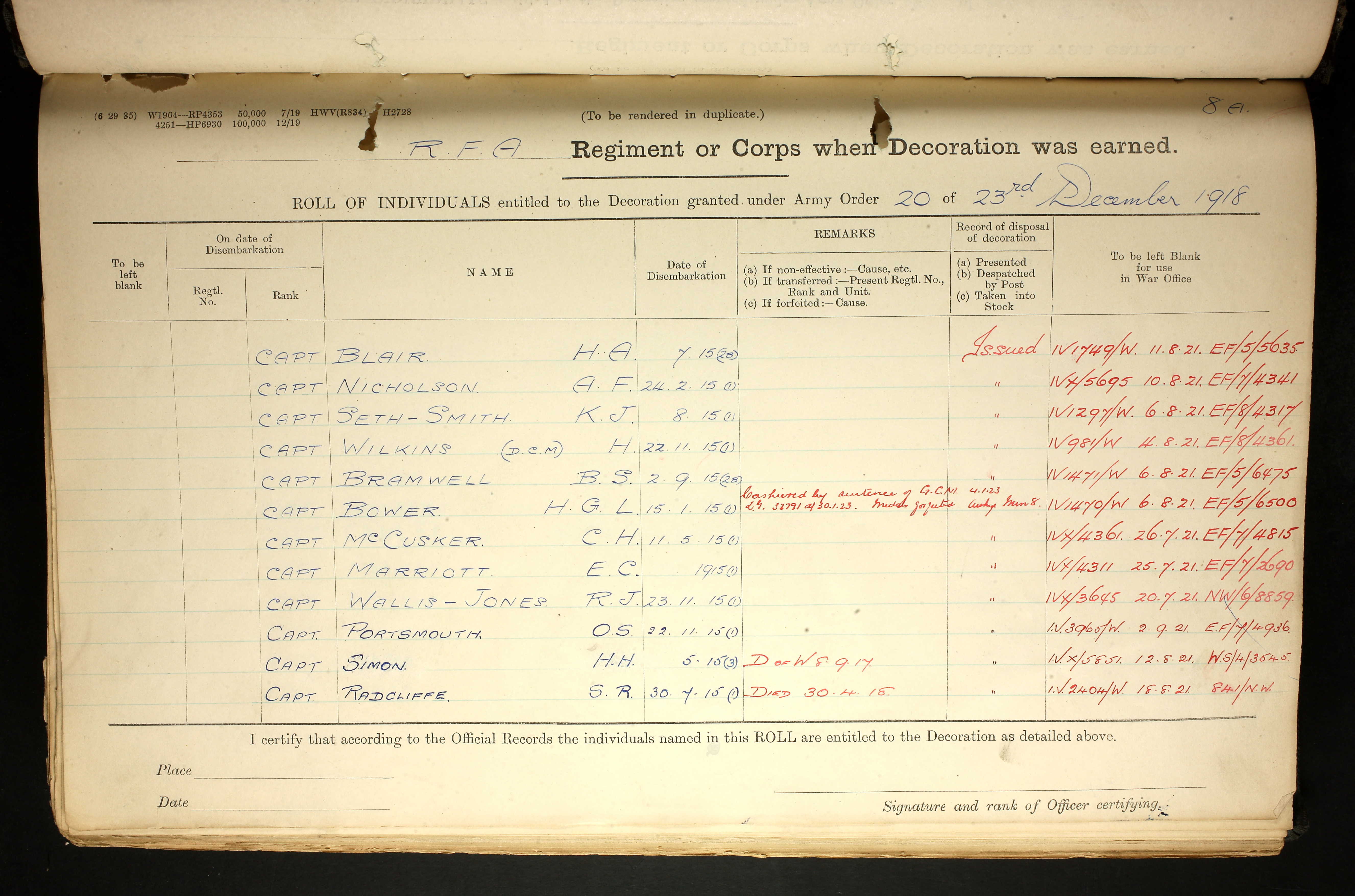 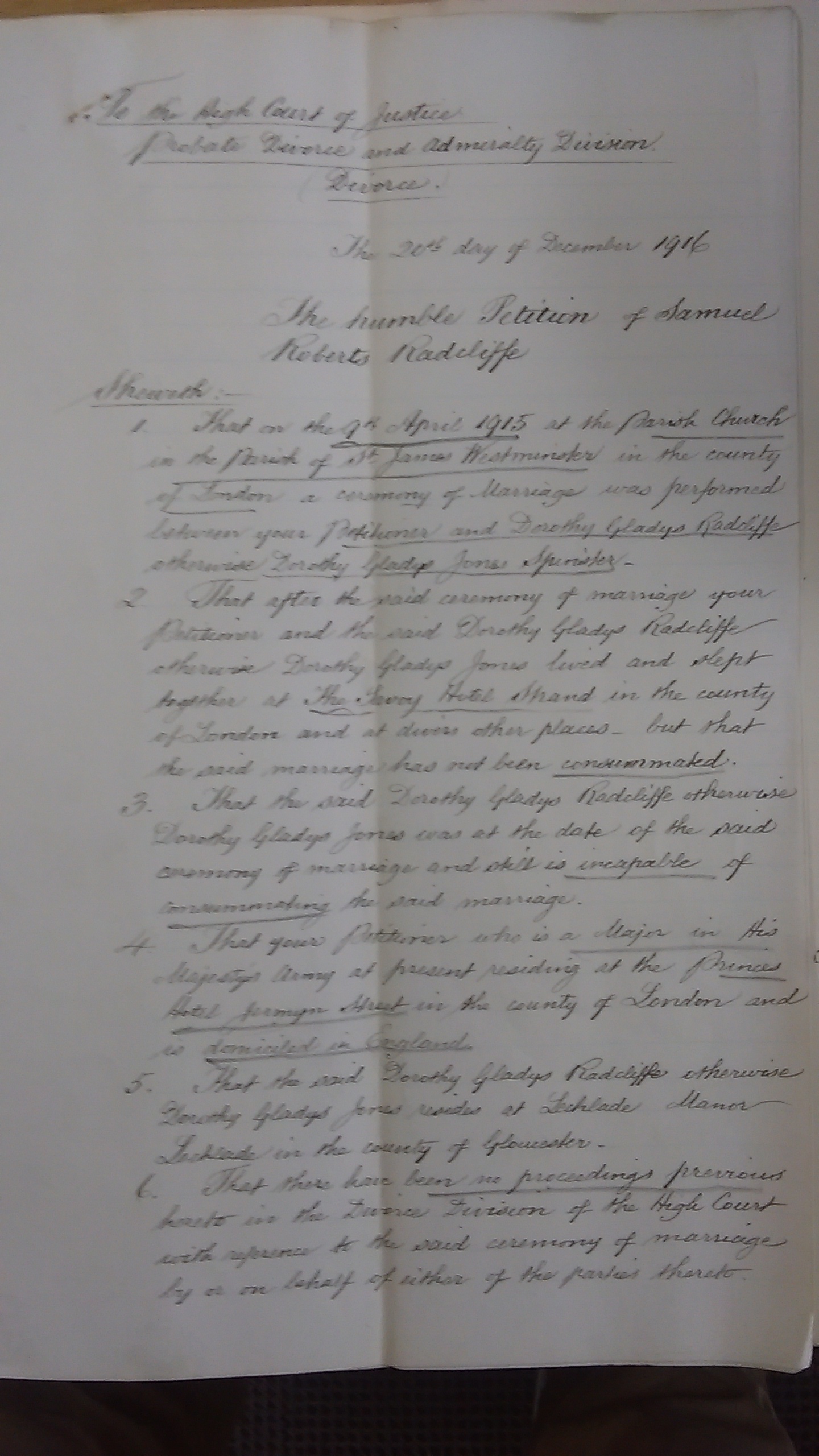 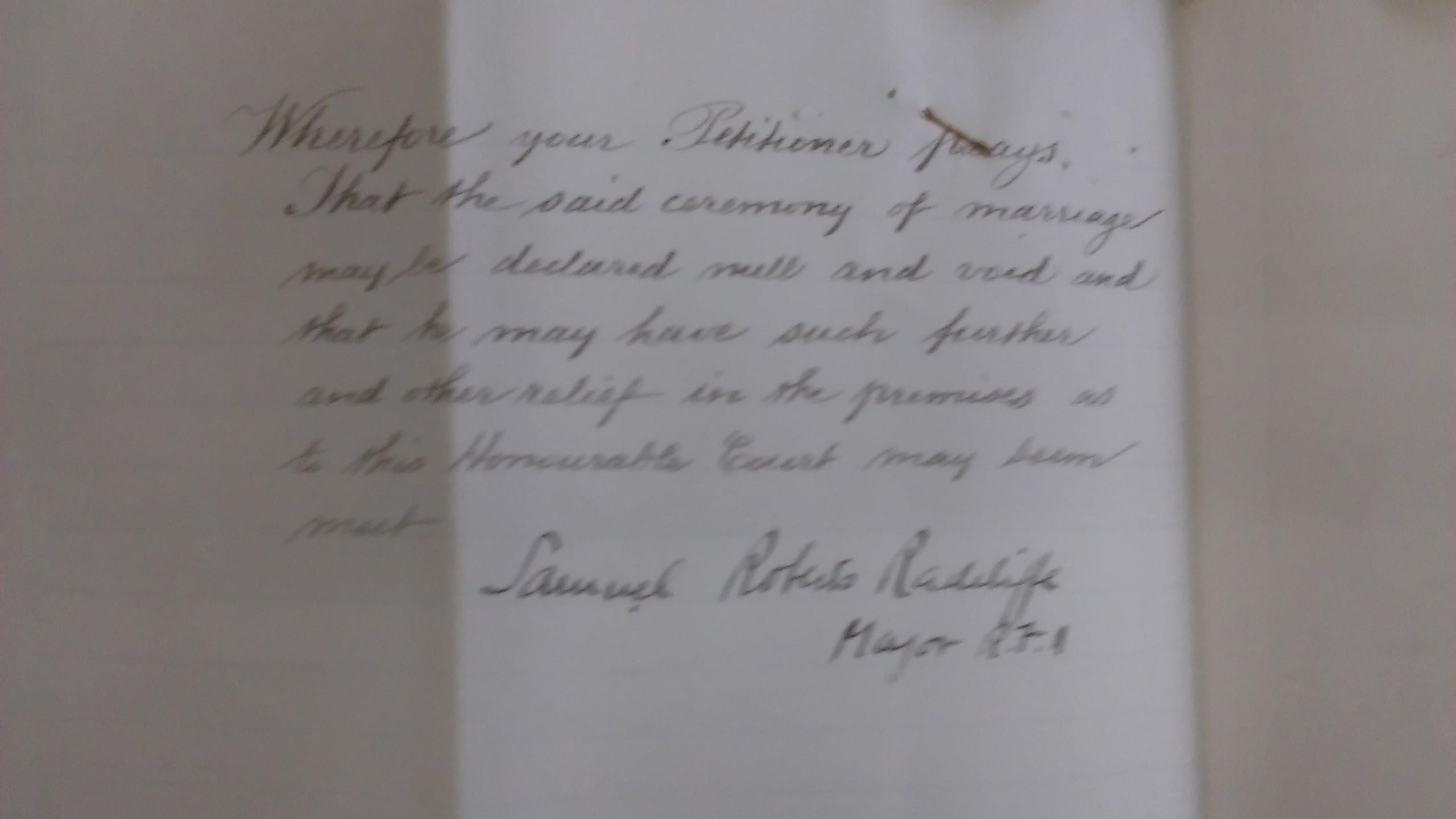