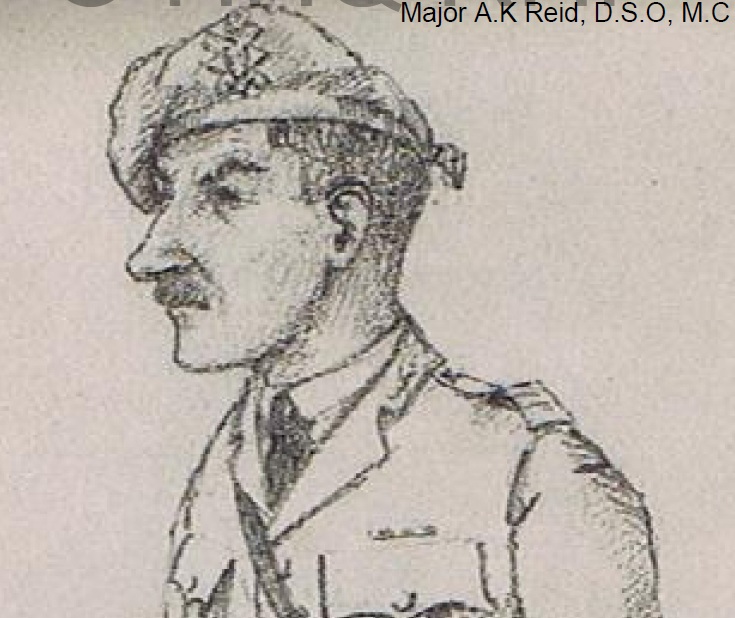 Major Alexander Kirkwood Reid from Glasgow Highlanders Officers Sketch book at rhf.org.uk
Name:
Alexander Kirkwood Reid
Determine relationship to...
Birth:
18 JUL 1884 Glasgow
Father:
James Reid
Mother:
Patricia Sillars
Married:
Ina Doris Law 30 APR 1917
Children:
Kathleen Margaret Reid
Born: 4 FEB 1918
Died: 17 AUG 1978
Alison Gray Reid
Born: 16 NOV 1919
Charles James Reid
Born: 1 DEC 1921
Died: 2 FEB 1961
Patricia Reid
Born: 26 JUL 1926
Death:
21 MAR 1948 5, Huntly Gardens, Glasgow aged 63
Remarks:
Alexander Kirkwood Reid was born in Glasgow on 18th July, 1884, and was educated at Kelvinside Academy. He became a Member of the Glasgow Stock Exchange on 12th September, 1911.
In 1906 he had joined the 5th (Glasgow Highland) Volunteer Battalion, H.L.I., as a Second-Lieutenant, and when the Glasgow Highlanders were mobilized in August 1914 he was a junior company commander, Capt. Reid, H.L.I., was awarded the Military Cross in the King's Birthday Honours of 22nd June, 1915, and exactly one year later was wounded by shrapnel.
On recovery he was posted second-in-command of the 2/9th Bn. H.L.I. which since March 1916 had been stationed at Maldon in Essex as part of the 65th Division, Southern Army Home Forces.
In 1917 Major Reid married Ina Doris Law, the daughter of a Glasgow shipowner.
Early in 1917 the second-line Glasgow Highlanders had moved to Ireland, eventually ending up at Dublin. By the end of that year, however, it had been decided to break up the 65th Division, and with it the 2/9th H.L.I. 'Sandy' Reid. was posted to the 1/9th, and rejoined the first-line battalion in the Ypres Canal support line sector on 19th July, 1918.
From November 1918 to January 1919 he was in temporary command of the battalion. On the 11th February 1919 he was demobilized, and in the King's Birthday Honours of 3rd June, 1919, he was awarded the Distinguished Service Order. At about the same time he qualified for the Territorial Decoration - war service being counted as double.
When the Territorial Army was revived in 1920, he again became second-in-command of the Glasgow Highlanders under Lieutenant Colonel A. H. Menzies, DSO, until 1923, when he became Commanding Officer.
Lieutenant Colonel Reid commanded the Highlanders until 1929, thereafter becoming a military member of the Territorial Army & Air Force Association of the County of the City of Glasgow, with the rank of full Colonel. In 1933 he was appointed Companion of the Order of the Bath; the GB of the Military Division being conferred only on, in the case of the Army, officers above the rank of Major who have been mentioned in despatches, which in Reid's case he had been - twice.
Since 1920 he and Colonel Menzies had been in partnership as Reid & Menzies, Stockbrokers, with an office at 86, St. Vincent Street, in Glasgow. Colonel Reid was Chairman of the Glasgow Stock Exchange for the year 1936 - 1937, and paid for the reconstruction of the luncheon room in the Exchange.
The partnership with Alexander Henry Menzies was dissolved on 14th March, 1955, so during the war that began the following year, Colonel Reid's busi­ness affairs were looked after by the firm of Service Brothers & Fraser. From 1939 until 1946 he was Vice-Chairman of the Territorial Army & Air Force Association and a Deputy Lieutenant of the County of the City of Glasgow. He was also Honorary Organizer, Home Guard, Glasgow Area, and a military member of the Glasgow University Joint Recruiting Board. In 1945 he was appointed a Commander of the Order of the British Empire.
Colonel A. K. Reid, CB, CBE, DSO, MC, TD, DL, died at 5, Huntly Gardens, Glasgow, on 22nd March, 1948. He was survived by his wife, three daughters and a son. 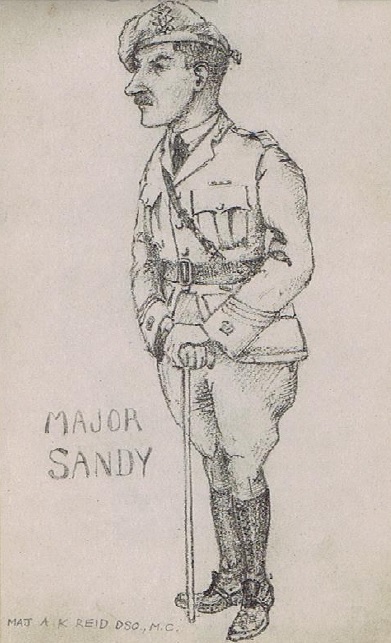