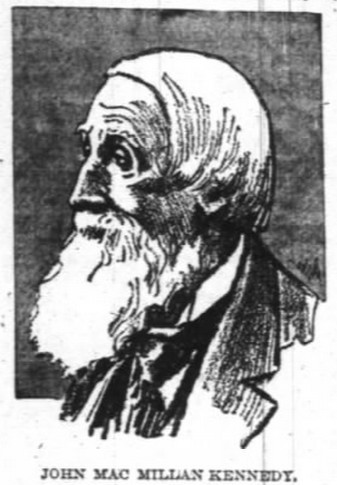 John MacMillan Kennedy from Chicago Tribune (courtesy of Andrew McAdam)
Name:
John McMillan Kennedy
Determine relationship to...
Birth:
26 FEB 1815 Colmonell, Ayrshire, Scotland
Father:
A Kennedy
Mother:
Elizabeth Macmillan
Death:
6 MAY 1899 Oak Park, Cook, Illinois, USA aged 84
Remarks:
John M Kennedy ex-cheif of police of Chicago expired at his home, 325 West Ontario street, in Oak Park, after several weeks illness. John MacMillan Kennedy was born on Feb. 26 1815, in Colmonell, Ayrshire, Scotland. When 15 years of age, in company with a younger brother, he came to America, landing at Savannah, Ga. From there they went to Campden S.C., where they settled. Mr Kennedy lived there for four years but took a strong dislike to slavery and declared he would live in no state where the institution was tolerated. he determined to go to the rich farming country in the Fox river valley in Illinois, which was being opened up to settlement, the INdians having ceded their rights. He and another young man purchased horses and then began their long and hazardous journey across the country. After great hardships they arrived at Ottawa Iils on May 6th 1824. Kennedy took up a claim of 220 acres in Fox river valley, and for several years worked hard clearing lands. In 1837 he married Eliza Ann Rogers and for twelve years lived on his farm. In 1843 Mr Kennedy rented the farm and moved to Chicago where he could give his children a better education. He first entered the employ of Walker and Day. Lumbermen but in 1852 embarked in the commission business with Gilbert A. Brady. In 1857, when John Wentworth was appointed mayor, he made Mr Kennedy a lieutenant of police under Cheif C. B. Yates who at the time held the title of captain. On the election of John C Haines as mayor in 1858 Mr. Kennedy was promoted to the position of chief of police
This position her held until 1860. he then returned to business life and for many years was in the grain commission line. Later he became connected with the Weighing association of the Chicago and Alton railroad. He retired from active business in 1887. Mr Kennedy left four children living. They are Mrs M K Ludington, Miss L M Kennedy and David Kennedy of Oak Park and Alexander D. Kennedy of this city.