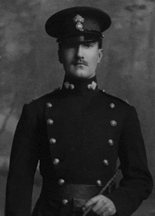 He went to Worcester College, Oxford in 1906 and was a tennis half-blue.

He was gazetted to the 3rd battalion Royal Fusiliers in December 1911 and joined the regiment in India in January 1912.
At the outbreak of the war he was serving on Lord Willingdon's Staff at Bombay as A.D.C. but obtained permission to re-join his regiment when it was ordered to France.
He was wounded in February 1915 when a bullet was embedded in his back. Refusing an operation to remove it, or to return to England to convalesce, he returned to the front in March and was killed in action in Belgium on 15 April 1915 by a Trench Mortar whilst in trenches only 4 feet away from the Germans.

He is buried at Tyne Cot Cemetery, LIV F 16.

His mother was a widow and living at Gombards, St Albans in 1915 when she wrote a letter enquiring about the possibility of getting his effects such as his ring, revolver and field glasses.
Unit War Diary extract
Service Record