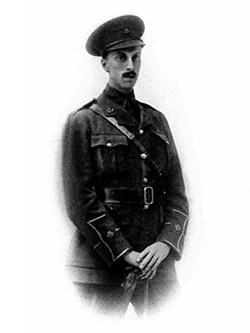 Photo of Launcelot Dunlop
Name:
Launcelot Lindsay Brook Dunlop
Relationship to John Anthony Crawford
Birth:
APR 1889 Applethwaite, Westmorland, England
Father:
Arthur Brook Dunlop
Mother:
Emily Smith Pollard
Death:
3 JUL 1916 France aged 27
Remarks:
Rugby:
LANCELOT LINDSAY BROOK DUNLOP was the second son of Arthur Brook Dunlop, The Howe, Troutbeck, Windermere.
He entered Rugby in 1903 and left in 1908. After some years in business he entered Merton College, Oxford, in the early part of 1914.
When War broke out he immediately offered himself for service and was given a Commission in the Cheshire Regiment in March, 1915. He went to the Front in France in February, 1916. He took part in the attack on Vimy Ridge, and in the Battle of the Somme, in which he was killed in action at Thiepval, on July 4th, 1916 age 27.
A brother Officer wrote :-"He was much loved and respected by the Officers and men of his battalion. I have often heard the Colonel and his Company Commander, both of whom were killed, express very high opinions of the work he did in the trenches. When we were at Vimy Ridge, he carried out several daring and useful patrols, for which he was highly commended by the Colonel. The men of his Platoon would have done anything for him, and he was untiring in looking after their welfare."His elder brother, Second Lieutenant W.E.B. Dunlop (O.R.), The Border Regiment, was killed in the Battle of Arras on May 19th, 1917.
https://rugbyschoolarchives.co.uk/RollofHonour.aspx?RecID=227&TableName=ta_rollofhonour&BrowseID=14

War Diary Extract 2nd-3rd July 1916, Thiepval:
The CO rejoined the battalion about 11pm and hastily detailed the OC Coys the few notes he had gleaned at Brigade Headquarters during the day. The attack was to be carried out in depth - the battalion attacking in 8 waves - D Coy on the left, A Coy on the right, C Coy in suppor of D & A Coy with B Coy held in Battalion Reserve. The Battalion was fallen in and marched via BLACK HORSE Bridge to the British trenches in R31 a v c.
Guides of the 15th H.L.I. met Companies after some considerable delay at BLACK HORSE Bridge and conducted them into the British trenches. At BLACK HORSER Bridge the Battalion was delayed an hour owing to a great number of wounded being brought down the Communication Trenches. During this delay the enemy shelled the vicinity of BLACK HORSER Bridge fairly heavily. The follow of evacuating wounded by the same trenches as used by troops was exceedingly well illustrated. In the first place it delayed the guides which was very disturbing to the minds of senior officers of the Battalion anxiously awaiting their arrival; secondly it prevented the Battalion moving into the trenches with any comfort or discipline. It was a common thing for a platoon to proceed a mile along a Communication Trench and then have to about turn and retrace its steps to allow wounded to be got out. Thirdly it increased the number of casualties from shell fire - as the enemy never ceased to shell the trenches while the congestion existed.
Thiepval 3rd July 1916.
It was about 2.15am in the morning of the 3rd when the Battalion Head Quarters were established at CAMPBELL POST just off CAMPBELL AVENUE (Grid square Q36d Map 57D SE 1/20,000).
On immediately visiting the Companies the Adjutant found that considerable number of casulaties had occurred during entrance to the assembly positions, that the British trenches were devoid of British troops and that the guides had no instructions other than to lead the companies to some particular spot in the trenches. How much of the trenches each Company was to occupy was left to the imagination - no proper relief of troops in fact had taken place.
By about 5.30am the Companies had more or less taken up some position of the trenches and ot in touch with one another. The trenches were exceedingly badly knocked about, affording little cover from fire and in a great many places little cover from view. Steps were taken to organise the Bombers and to ascertain where the dumps were to ensure a supply of bombs and S.A.A. to the Companies.
At about 6.20am the Border Regt on the left of the Battalion (with whom touch had been made) attacked the German position but by whose orders it is not known.
The right flank of the Borders being exposed, the leading Companies of the CHESHIRE Reg immediately attacked and the assaulting waves passed over NO MANS LAND in perfect order. Word to this effect was immediately sent to the Commanding Officer who at once proceeded to the scene of action.
The assaulting troops very soon cam under a withering fire from Machine Guns which made the ground t about 50 yards from the first German line absolutely impassable. Line after line of troops were mown down. The Commanding Officer who wen with the reserve Company was unforunately killed and Captain Hill, the Adjutant, on whom the command of the Battalion devolved decided to get the men still living back into the trench from which they jumped off and to hld it as a defensive line. The remainder of the day was spent in trench warfare and carrying up of wounded and other casualties.
Unfortunately the list of casualties was large and included every Company Commander. 20 officers & 657 Other Ranks entered the trenches on the 3rd and of their number 6 officers & 350 ORs came out on the night of the 4th instant.
Service record
WO-95-2250-1_War Diary July 1916
Trench Map of Thiepval Apr 1916
Trench Map of Thiepval Apr 1916 detail

Map of Thiepval with modern overlay