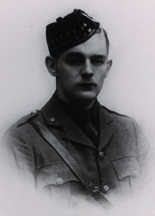 'He had been in residence at Pembroke, Cambridge, for two years when war broke out. He at once joined the Royal Scots, and was gazetted Captain in 1915. He was wounded by a machine-gun bullet during the retreat, and died at a base hospital on March 25. Charlie Cowan did excellent work at School, where he was immensely popular alike with masters and boys, combining as he did keenness and thoroughness with a most cheery disposition. As an officer he was equally good—strict with his men, courageous as a lion, and an excellent leader. We offer our sincerest sympathy to his bereaved father.' (Malvernian, Nov 1918).

Suffered in March 1915 from diarrhoea for 10 days, and then sent to hospital for bronchitis.
In January 1916, suffering from bronchial catarrh which was better by 6th July 1916, 3rd Bn The Royal Scots.
In April 1917, he was recovered from Bronchitis & Phthisis.
Died at No 51 Stationary Hospital in France of wounds received in action (12th Bn The Royal Scots).

There is a stained glass window above a cross dedicated to his memory at the Church of St James the Less in Penicuik.