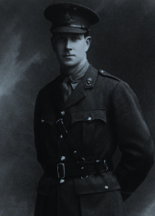 'Stanley Crisp was a boy of fair ability, and showed distinct promise at cricket. He was popular in his House. On leaving School he went to the Malay States, as a planter. He did excellent work in the war, and was a temporary Major in the R.F.A. when he died of wounds.' (Malvernian, Mar 1918).

On the 9th December 1917, his wife, Mrs Muriel May Crisp, received a telegram at the Mascot Hotel on Baker Street from the War Office regretting that her husband was dangerously ill with shell wounds to the chest and the following day on the 10th December 1917 she received a telegram deeply regretting to inform her that he had died from his wounds at No 39 Casualty Clearing Station, Italy.