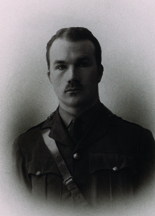 'He came to Malvern as a Classical scholar, and at an early age reached the Vlth Form, showing much promise. In 1910 he became a solicitor, practising in Birmingham. He was gazetted a 2nd Lieutenant to the H.G.A. in December 1915, and after much service abroad, where his knowledge of languages proved of the greatest use, he succumbed to malaria and dysentery on August 15th. He was well-known as a golfer in the Midlands, winning the Warwickshire Gold Medal three years in succession. Writing of him a friend says: "His character was quite an unusual one, for he was not given to frivolity, but with level-headed and sound intelligence and a cultured mind he united rare amiability with a refreshing sense of humour and great kindness of heart. Thus he won universal esteem and regard, just as there was so much admiration for his fine sportsmanship. He leaves a record of a finely developed intellectual nature, splendid young manhood and last of all, the noblest sacrifice.'' ' (Malvernian, Dec 1917).

134th Siege Battery, Royal Garrison Artillery.
Disembarked at Salonica on 20.8.1916
On October 1st 1916, telegram sent stating that he disembarked at Malta from Salonica suffering from Malaria.
Died of Dysentery.