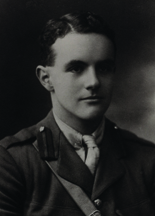 Times Obituary:
Eric Jackson-Bristow RAF who was killed while flying near Caterham in Surrey on January 27 aged 23 was the only son of Mr J. J. Jackson-Barstow and Mrs Jackson-Barstow of "The Lodge" Weston-Super-Mare. At the age of 19 Captain Barstow enlisted in the North Somerset Yeomanry in Bath and took part in the battle of November 17th 1914 outside Ypres in which a number were killed, and Barstow was wounded. He was given a commission after a few weeks sick leave, and was appointed ADC to General Lee, serving on the East Coast.
When thoroughly restored to health he applied for a transfer to the Royal Air Force. He gained his "wings" in 1917, and had since been flying regularly in France and Germany. He was making for Kenley Aerodrome when a heavy snow storm came on and in endeavouring to land he crashed into a bank in Marden Park."