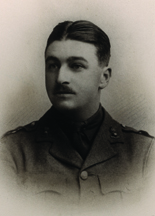 'A boy of vigorous, fearless character, with a strong sense of humour, and withal, when occasion required, a deep seriousness of outlook. He was at his best when things were going worst. At the outbreak of war he was farming in the Argentine, but came home and received a commission in the R.F.A. He was at Suvla Bay until the evacuation, returned to Egypt with his regiment, and came to England last August. He transferred later to the R.F.C., and died on January 16th, as the result of an accident while flying in this country.' (Malvernian, Mar 1917).