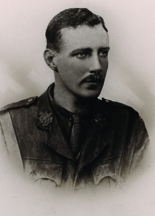 'He left school rather young and before reaching a position of authority. He was a bright intelligent boy, and though not very robust physically, he showed considerable courage and determination in all that he undertook. He was killed at the Dardanelles about the 9th of August.' (Malvernian, Nov 1915).

'He was shot first in the hand and then in the head and killed on the ridge to the left of Chocolate Hill about 5 o'clock in the morning of August 7th. Lieut Gillbank & McCausland were killed at the same time & place. There were only nine men at this particular spot and they were unaware that the battalion had retired.
Witness says that only two men got back and he (witness) was one of them.' (Testimony of Private Boardman, Border Regt, Grand Hotel, Helouan, 15th October 1915).

Below is an extract from the Unit War Diary:
'9th August 1915. At 1.45am the Battn left bivouac & marched to Yilghin Burnu reaching positions for deployment just north of this point at 5am.
The advance started about 5am. The advance proceeded in a satisfactory manner till 6.30am, the firing line reaching the nalla near Ismail Uglutepe. The left at this junction about the region of Kanli Keupru Dere was driven in, the enemy coming on to Hill 70 & the heights of Abrijka thereby enfilading the left of the Battn attack. A & B Companies were now pushed into the firing line. Battn Headqrs were formed along the road just north of Tordut Chesme, a very heavy enfilade fire from enemy machine guns was experienced & the firing line became divided into isolated groups, no supports coming up. A further retirement on the left caused the Commanding Officer to collect as many men as he could along the road about Tordut Chesme. The line was held all day until 5pm. A large number of men had been killed & wounded along the line by machine guns. At 5pm the remainder of the Battn retired about 150 yds & occupied an old trench & dug in.
Casualties being Officers: 12 killed, 4 wounded & 1 missing. 20 officers started the attack.
Rank & file: Killed 26, wounded 241, missing 131. 696 men started in the morning.'
Memorial at St John The Baptist, Itchen Abbas, City of Winchester, Hampshire, England