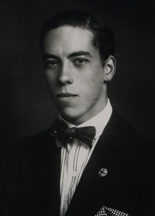 'At the beginning of the war he was studying as an articled pupil for qualification as a Chartered Accountant. In September 1915 he obtained a commission in one of the Territorial Battalions of the S. Staffs. Regt. On March 16th he was reported as wounded and missing, and subsequently as killed. His warm hearted, kindly nature won for him many friends both at School and afterwards. A recent letter from him shows the keen interest he always felt in the doings of his School and House.' (Malvernian, Jun 1917).

Some sixty books were presented to the Grundy Library by C. E. Abbott (O.M.), in memory of his brother.

There is a life size bronze figure of him at rest in full uniform at St James Church, Handsworth, Birmingham, with the inscription:
“TO SAVE THE WORLD HE GAVE HIS LIFE AND THAT TO US IS EVERYTHING”.Ref