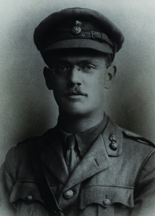 'He joined up as Lieutenant in the Royal Welsh Fusiliers in November, 1914, and was out at the front, acting latterly as temporary Captain from October 1915 to June 1916, when he was wounded and came home. He returned to the Front only last February, and died of wounds received on the 27th. Seriousness of purpose, a strong sense of duty, unselfishness and a charming modesty concerning his achievements were marked characteristics of Bernard Adams and won for him the respect and affection of those who came in contact with him. His blameless record, high ideals and thorough loyalty could not fail to influence those among whom he lived, and his House, especially, owes very much to him. At Cambridge he threw himself eagerly and with the keenest enjoyment into all that is best in 'Varsity life. A College friend wrote of him: "Bernard will always be an inspiration to me, connected with the purest and highest ideals a man can have." As regards his work among Indian Students his Chief (Dr. T. W. Arnold, CLE.) writes : "He had endeared himself to all of us at 21 Cromwell Road, and I shall always remember with gratitude the years during which I was associated with him in a work he had so much at heart. It was not an easy task . . . . And his sense of duty carried him through and helped to encourage his colleagues." A fellow officer, writing of the action in which Adams fell, after mentioning acts of self-denial and thoughtfulness for others, says: "Of one thing I am fully convinced, and that is that the success of the attack was mainly due to his glorious bravery. It was great, and his deeds and bravery were to me a great tonic, and therefore must have been the same to all who saw them I shall never forget his magnificent bravery."' (Malvernian, Apr 1917).
During his convalescence in the second half of 1916, he wrote about his experiences in the trenches in a very detailed and vivid manner in the book 'Nothing of importance'. It can be read online here

He returned to the front in January 1917 and a few weeks later he was severely wounded leading his men in an attack on Serre on the 26th February and died the following day in hospital. His fellow officers included 2nd Lieutenant Siegrfried Sassoon who according to the Unit War Diary was 'struck off' on the same day. Siegrfried Sassoon while at Craiglockart Hospital gave Wilfred Owen his annotated copy of 'Nothing of Importance' when he heard that Owen was going back to the front in October 1917. The book is now in the 'Wilfred Owen Collection' at the Weston Library, part of the Bodleian Library, University of Oxford. Sassoon wrote on the fly leaf that he is referred to as Scott in the book.The full annotations made by Siegrfried Sassoon can be seen here


The Daily Telegraph wrote the following review of the book: "With exemplary modesty the title of this book completely belies its contents. So far from containing "nothing of importance," it will rank, beyond question, among the most significant records which the war has produced. For it is a work of the rarest vividness and distinction; and at every turn it is marked by a radiantly sincere determination to tell the truth about things which have generally been grossly distorted by sentiment and cant. Nothing more real or more poignant has been written about the war, while a quiet sense of humour, playing over the narrative, continually keeps the writer upon the safe side of exaggeration. This is a book that all stay-at-homes should read with deliberation; its success among the active combatants is assured from the outset. For they alone are in a position to appreciate its clarity and truth ."
Biography at livesofthefirstworldwar and at forgottenpoetsofww1 and at back of his book.