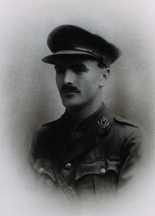 'A kindly, unassuming nature, and a quick perception of duty were marked characteristics in him, and the following account from The Times proves that he served his country with that keen loyalty he had shown for his School and House: "Captain Thomas Horsfall Crofton, M.C., Connaught Rangers, killed on March 21st, graduated as an engineer at Trinity College, Dublin. He afterwards went out to British Columbia, and directly war was declared he enlisted there as a Private in a Canadian Highlander battalion, and came to England with them; but early in 1915 he obtained a commission in the Connaught Rangers, his local regiment in Ireland. He earned a "parchment" and a Military Cross by his recent conduct at the front." ' (Malvernian, Jun 1918).
Detailed Biography at Connaught Ranger Association website