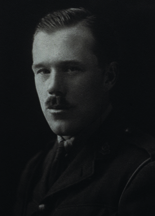 'Reginald Cross joined No. 5 from Stone House School, Broadstairs, in 1906 in the old House, and very soon made his mark at football, and as a strenuous doer in School life. He was a good naturalist, and as a junior a great owner of livestock. He was in the 1908 House Team which won the Cup in an historic Final, and justified his selection. He was at one time intended for the Army, but eventually went to Clare, and later to British Columbia. The Times says ;— "On the declaration of war he returned from British Columbia and enlisted in Lord Strathcona's Horse, and went to France with the regiment in May, 1915. He obtained a commission in the Dorset Yeomanry in November, 1915, and became a scouting officer to the brigade. He was attached to the South Lancashire Regiment in October, 1917, and left for the front immediately. A brother officer writes :—' I know you will be proud to hear that he died while carrying back a wounded man from No Man's Land; he was shot through the head and died immediately. He had already carried in one wounded man. I feel no one could wish to die doing a better duty. We all both loved and admired him, and he will be greatly missed in the battalion. He was always so full of life and so cheery under all discomforts. His men loved him.' " (Malvernian, Jul 1918).