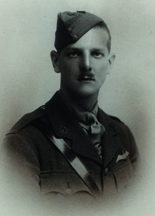 'He left school before his full course had run, but there remained behind him a pleasing memory of cheerful and unselfish companionship. Those who have been in touch with him in latter years have been struck with the earnestness he showed in business and the delight he took in his life abroad.' (Malvernian, Dec 1916).

Obituary from The Times dated 12th Dec 1916:
"CAPTAIN LESLIE OAKES CROWTHER. Flight Commander, R.F.C., killed on December 6, was the second son of Mr. and Mrs. H. O. Crowther, of Broadclyst, Beckenham, Kent. Born in 1891, he was educated at St. Andrew's School, Eastbourne, and Malvern College, afterwards spending two years in New York and Dresden for educational purposes. Captain Crowther joined the Royal West Kent Regiment in September, 1914, and in December, 1915, transferred to the Royal Flying Corps. For many months he had been at the front, where he was engaged in many air flights and bomb-dropping expeditions. His major writes:- "The squadron has lost a most capable and popular officer, and I cannot say how sorry I am and my officers to have lost such a good fellow"