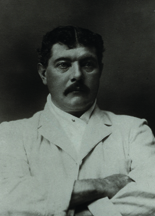 'He spent the greater part of his life as a planter in Ceylon and the Federated Malay States, and was at one time chairman of the Planter's Association. He was for 16 years, since its inception, manager of the Linggi Plantations (Limited), and since 1911, when he retired from the East, a director of that and other rubber companies. In 1914 he went to France with No. 4 Motor Ambulance Corps, gaining the 1914 Star, and 1916 he became Chief Commissioner for Church Army Huts at the front, a position from which he retired last year owing to ill-health: he, unfortunately, never recovered his health, and he died in England in May of this year.' (Malvernian, Jun 1918).

He went to France in October 1914, taking his own car. He was a civilian, a member of the Church Army, and he was a chauffeur for the British Red Cross, working for the Motor Ambulance Department. He was attached to a Clearing Hospital at the Front and died on 8th May 1918 from an illness contracted in France.
Biography at West Sussex Photo of gravestone at findagrave