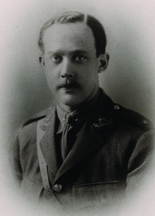 'Hedley Cuthbertson's school-life at Malvern of 4.5 years was marked by two chief characteristics, his success as an athlete, and his marked independence of character. At football and cricket generally he reached a good Eleven standard, while his wicket keeping was something better. In fact wicket keeping was exactly suited to his temperament. It called out all his skill, and entailed no bustle; for he was one of those who could not be bustled. But his strong will and his kindly disposition were the chief causes of the affection that his school friends entertained for him at School and afterwards, and which endears his memory to them now.' (Malvernian, Nov 1917).