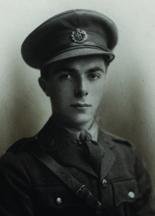 'He was a boy of adventurous spirit, well fitted by his temperament and his technical knowledge for service in the R.A.F., in which he was given a commission last year. For six months he was employed as an Instructor, after which he applied for active service abroad, and was sent to France in April 1918. On September 24th his detachment had carried out successfully some important work, when on the return the twelve machines composing it were attacked by an overwhelming force of fifty aeroplanes. Asbury's machine was last seen going down under control. He was at first reported as missing, but it was subsequently ascertained that he and his observer had been killed. His C.O., in a letter to his parents, says: "Your son has done wonderful work with his squadron, and his fine leadership and his cheeriness are sadly missed." ' (Malvernian, Feb 1919)