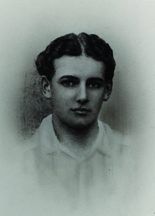 Regiment: Royal Fusiliers.
Died: 07 July 1916 aged 24 in France. Killed in action at the Somme.
Battle: Battle of the Somme. Cemetery: Thiepval Memorial P. 8C 9A 16A

'Alban Arnold was, as his record shows, distinguished both at school and afterwards at cricket. He was an excellent cricket-keeper, one of the two or three best we have had, and a very dangerous though perhaps not quite a sound bat. It was his consistently heavy scoring that forced him into the Cambridge Eleven of 1914. Here he was a steady, quiet, somewhat reserved boy, but always pleasant and attractive, and of striking appearance. He left a year, before his proper time to study in France, with a view to entering the Consular Service. As time went on he "came out" much more, and promised to become a really valuable man. He enlisted in the Public Schools Battalion in the first month of the war, and received his commission later in the year. He was killed in an advance on July 7th, 1916.' (Malvernian, Nov 1916).