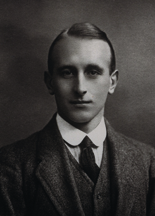 Letter from the Commanding Officer, 4th Btn Royal Warwickshire Reg to The Secretary, War Office, Golden Hill, Isle of Wight, 16th April 1915.
Sir,
I regret to have to report the death of 2nd Lieutenant R. G. Drysdale, of the Battalion under my command.
I have not yet heard the opinion of the Coroner’s inquest, but I fear there is no doubt whatever but that this Officer took his own life.
2nd Lieut Drysdale completed a Junior Officers’ Course at Portsmouth last Saturday and had leave until Wednesday night. About 7 o’clock in the evening I received a telegram from him to say that he had missed his boat and would cross from Lymington to Yarmouth by the first boat in the morning.
He was seen walking up and down the platform for some minutes before the train came in, with a revolver under his arm. Directly the train came into Lymington Town Station he got into the carriage alone and shot himself in the head. He died a few minutes afterwards.
This officer has been suffering from fits of depression for some time and had on more than one occasion asked me to allow him to resign his Commission, giving as the reason that he did not feel competent to carry out the duties of an Officer. This idea was entirely imaginary, as he was able to and did do his work quite well. He had a bad attack of influenza before he joined, and a Doctor informed me that he thought that the depression and Insomnia he was suffering from was probably due to this cause. Seeing the state of mind he was in, I went out of the way to cheer him up and asked others to do so too, which I know they did.

Badsey parish magazine of May 1915:
“On all sides there have been expressions of sympathy with Mrs Drysdale in the loss of her son, Lieut Drysdale, of the Royal Warwickshire Regiment. Had his devotion to duty been less his life would, in all human probability, have been longer. Undertaking new duties and responsibilities at a time when he was not even convalescent from influenza, and when he was altogether unequal to work of any description, he became depressed and despondent about ever being able to cope with them. As his academic record and the testimony of his Colonel showed, his natural gifts were such as go to make a capable and efficient officer. It was, in fact, in consequence of his qualifications and in the hope that his health might improve that he was urged by his Colonel to retain his commission when he asked to be relieved of it. Unhappily, he never recovered from the effects of the initial strain and the burden eventually proved more than he could bear.”
Biography at Badsey Society