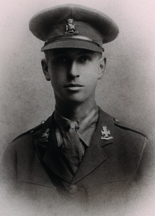 'After passing through Sandhurst, Kenneth Doddrell was gazetted to the Wiltshire Regiment. He had only been a short time in France when he was killed in action on October 7th. He was a quiet, unassuming boy, and popular in his House. In some respects he was old for his years, but always thoroughly interested in and keen on everything connected with School life. At Sandhurst he won distinction as a fine long-distance runner. He had all the qualities which make a good soldier and popular officer.' (Malvernian, Nov 1918).