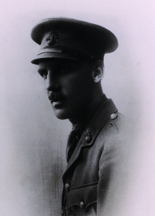 'Stanley Eames was a boy of gentle character, modest, studious, and, though he would never have claimed to be an exact scholar, a lover of the best in literature. He himself produced a few years ago a small volume of verse which gave promise in its thought and poetic feeling of greater performance in the future. He went up as a Scholar to Exeter College, Oxford, in 1907, and took a Second Class in Classical Moderations and in Greats. Appointed to an Eastern Cadetship in 1911 he became Collector, Magistrate, and Assistant Deputy Judge for Malacca and later for Singapore. He served in the war as Lieutenant in the 7th Battalion Royal Fusiliers, being at the time of his death attached to the 12th Battalion. He was mortally wounded on Feb. 15th, when he had crawled to the rescue of two men who had been sniped, and spent his remaining strength in shouting to prevent others from attempting to bring him in. "We have lost," says a letter from his regiment, "a brave, conscientious, and high minded officer." ' (Malvernian, Mar 1916).

From 'The Evening Dispatch' 1 March 1916:
'Lieutenant Eames gained an open classical scholarship to Exeter College, Oxford, and took honours in Classics.
For three years he was in the Civil Service in the Malay States.
He went out to the rescue of wounded men, and was himself shot by a German sniper. The men belonging to his company offered to dash out to bring hin back to the trench but he ordered them to keep where they were because of the risk. He told them he would wait until it was dark. The wounded officer was subsequently got back to safety, but succumbed to his wounds'.

He is commemorated on the Malacca War Memorial Christ Church, Malaysia and the Singapore Cenotaph.
Lives of the First World War