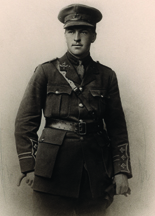 'Llewellyn Edwards will be long remembered by his many friends here and at Cambridge for the charming modesty of his manner, the vigour of his intellect, and the robustness of his character.' (Malvernian, Jun 1918).

He was killed in action on March 22nd at 11pm.
A fellow officer wrote – ‘I am the only officer left in his Company and was with him where he was mortally wounded. All day previously he had shown great cheerfulness and disregard of danger, and was forever walking up and down urging and cheering on the men. Even when he was wounded his last words to me were, ‘Look after the Company, and keep down off the top of the trench.’ These words were just characteristic of him – a way of thinking of others before himself. A very good officer, liked immensely by his fellow officers, and loved by all his fellow men’.
Biography at Remember the Fallen