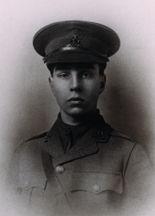 'He volunteered for service shortly after the war broke out, and was attached for a time to the 4th P. S. Battalion, Royal Fusiliers, and was training in Surrey. He was subsequently gazetted as 2nd Lieut, in the Duke of Wellington's Regt., and went out to Gallipoli in 1915. After an engagement at Suvla Bay on August 12th, he was reported missing, and unfortunately there can be no doubt now that he was killed on that date. Chris Elmhirst was not at school long enough to reach a prominent position, but those who knew him here will remember him as a bright, cheery companion, who took a keen interest in the general life of the School, and helped to make life easier for others, by contributing to their happiness. After he joined the Army his letters showed the interest that he took in the work he was doing, and his eagerness to do his part, wherever his services were required.' (Malvernian, Dec 1916).

Barnsley Chronicle 7 October 1916:
'He was articled to Messrs. Fennell and Green, mining engineers, of Wakefield, when he volunteered for service.
He was officially reported missing at Suvla Bay on August 11 or 12 1915, and is now presumed killed.'

There is a memorial plaque in St Mary's Church, Worsborough to him and his brother William.