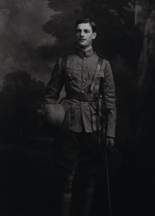 'He obtained an Indian Cadetship at Sandhurst, was commissioned to 14th Jat Lancers in August 1905, and promoted Captain nine years later. He served on the first of the Frontier Expeditions in India, during the war, as extra A.D.C. to Lieutenant-General Blomefield, and on the second as signalling officer. Subsequently he left for another front, where he was killed on February 25th.' (Malvernian, Jun 1917).