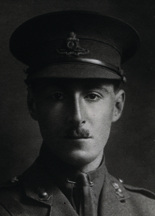 'By the death of Guy Bailey the Service has lost an Artillery officer of no small promise. His interest and keenness in soldiering was of long standing. At School he devoted an exceptional amount of time to work in the Cadet Corps. At Oxford his interests were divided between rowing and O.U, O.T.C. He rowed in his College Eight for four years, and was Sergeant-Major of the University Battery.
On leaving Oxford he joined the 4th East Anglian Brigade R.F.A., and in March 1915 was selected for a commission in the Regular Artillery. He took part in the landing on Lancashire Beach on April 25th, and was one of the last to embark at the final evacuation of Cape Hellas. He was mentioned in despatches for work in Gallipoli and received the Military Cross. In August 1915 he was transferred to the R.HA., and a year later obtained his captaincy. For three months before his death on Feb. 28th, he was in command of his battery. As a boy he displayed and developed those qualities which marked his after career—a strong sense of duty, courage, force of character and no fear of responsibility. A bold horseman, well known in the Heythrop country, with a real love for horses, he was in his element in the Horse Artillery. Many will mourn the loss of a loyal friend and true sportsman. ' (Malvernian, Apr 1917).

Lived at Foxholes, Chipping Norton, Oxford.
As a Lieutenant, took over command of a neigbouring battery during the prelude to the battle of the Somme on the 28th June 1916 as its Commanding Officer was injured.
Killed by a shell at about 3pm on the 28th February 1917.
At time of death was a Captain, but acting Major, which was subsequently confirmed.

His effects went to his father, with the exception of his pocket book which was of an intimate nature, which went to Mrs Mainby Luxmore, 5 Cumberland House, Kensington Palace.