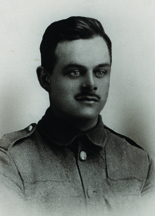 'Oliver Bambridge's friends will readily understand with what alacrity he joined the service at the earliest opportunity. Had he been spared, he would have obtained his commission. It was, however, characteristic of him to join in the ranks, rather than to wait. Many will remember his great keenness in everything he did, and his delightfully happy disposition. He left at a comparatively early age, and before he had reached a prominent position, but not before he had shown that he possessed character and courage. He was the youngest of three brothers whose names are held in honour in their house, and all of whom joined early in the war. He died of wounds on July 13th.' (Malvernian, Nov 1916).

At 9pm on the 10th of July 1916, B and C Companies of the 10th Battalion Royal Fusiliers were pushed forward to relieve the 13th Battalion Rifle Brigade in their attack towards Pozieres on the Somme. The Fusiliers lay in exposed positions for the next two days under heavy shell fire, suffering a number of casualties but without engaging
the enemy. Frederick Bambridge was wounded on the 13th of July and died later the same day.

His brother, Rupert Charles Bambridge, was a much decorated Captain in the same Battalion, being the holder of the D.S.O., M.C. and M.M. Sadly, he too was killed in action, in May 1918.
Medals sold at auction for £340 in 2004