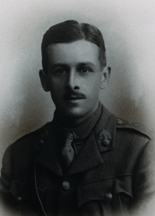 'Rupert Bambridge joined the ranks of the Royal Fusiliers, and went to France in the following July. He was wounded in January 1916, and three months later commissioned. He was again wounded in the Somme battle, in which he won the M.C. To this decoration he added a Bar in the autumn of 1917. Last March he was awarded the D.S.O. for his leadership, skill, and energy in organising the counter-attack which completely established the position. Four honours are a great record, and yet an Officer in his regiment writes: "They do not do him sufficient justice." The sterner life of active service served to develop in a wider sphere the qualities which characterised him at School. His energy, fearlessness, strong sense of duty, and complete appreciation of his responsibilities as Prefect and Head of his House, will be readily recalled by those who knew him as a boy. Letters from brother officers bear witness to the same qualities. "He was the perfect type of regimental officer," writes his C.O., "brave and fearless, full of energy and zeal, loved by his men and officers. He was absolutely reliable, and I never knew him fail in any task that he was given to do. I always felt confident, when he had the job in hand, that the work would be carried out." Another officer records how on several occasions, when under a heavy bombardment, he displayed magnificent courage in looking after his men. He was the eldest of the three brothers, who won for themselves in no small degree the regard and respect of all who knew them. All three have served, and two have fallen in the service of their country'. (Malvernian, Jul 1918).

Bar to MC Citation: 'He organised and consolidated his position and established a line of posts under a heavy shell and machine-gun fire. Later in an attack, when the advance was held up by machine-gun fire, he went forward from the support line and reconnoitred the situation. He set a fine example to his men.'

DSO Citation: 'He was ordered to lead his company in a counter-attack against the enemy who had gained a footing in part of the front line. The night was very dark, and the exact position of the enemy was unknown, but he led his men to the best position of assembly, and after a personal reconnaissance launched a counter-attack. This attack being only partially successful, he quickly organised another, which drove the enemy back a considerable distance. At dawn he launched a third attack, drove the enemy out, and completely re-established the original position. The success of the operation was largely due to his splendid leadership, skill, and energy.'