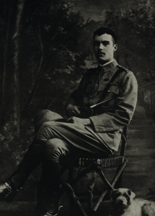 'He joined the Militia (3rd Royal Lancaster) in January 1900, and served in the South African War; Queen's Medal with clasp. In May 1901, he was gazetted to the Bedfordshire Regiment, and in August 1903, joined the Indian Army (82nd Punjabis). He served as Adjutant from 1907-11, was promoted Captain in 1909, and qualified for the English Staff College in 1913. He passed for the Indian Staff College in 1914. He became Staff Captain at Allahabad in November 1914, and D.A.A.G. in February 1915. He left India on active service in November 1915, and was killed on the night of January 7th, while searching for two wounded officers. His name appeared in the list of Mentioned in Despatches issued on October 20th. Norman Howell was a delicate-looking little boy when he came to Malvern, but he had pluck and grit, and his subsequent career proves that he was made of the right stuff. His character was most attractive, and if he had not left early to fight in the Boer War he would doubtless have made more of a mark at School. His service record shows what a good soldier he was.' (Malvernian, Nov 1916).