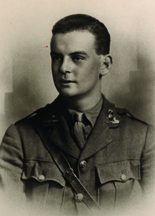 'A sound, reliable boy in every way, an excellent leader and a good shot, Hoyland was a splendid type of the "First Hundred Thousand." He secured a commission in the Lancashire Fusiliers, and was reported wounded and Missing in October 1916, and is now assumed to have been killed.' (Malvernian, Dec 1919).