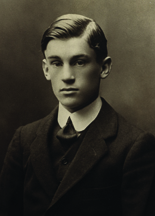 He was fond of polo and sailing.
At the time of his death his battalion formed part of the VIIth Division, and as the senior officers had been killed he was leading his company.