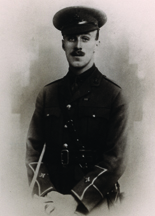 'At the outbreak of the war he returned to England and obtained a commission in the R.A., and according to the report of his C.O. proved a most capable officer. He was wounded in October of last year, and was killed in action in September of this year. He was a boy and young man of singular charm and strong personality, and extremely popular wherever he was.' (Malvernian, Nov 1916).