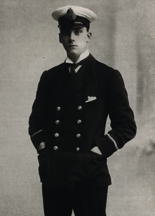 'He was the son of Dr. A. W. Lemarchand (O. M.). He studied medicine at St. Bartholomew's, and after qualifying obtained a commission as Surgeon Sub-Lieut, in the R.N-V.R. He took part in the Zeebrugge and Ostend Expeditions with H.M.S. Whirlwind, and came safely through. An attack of pneumonia early this year proved fatal, and he died on February 2nd. We offer our most sincere condolences to his father on the loss of a son of much promise.' (Malvernian, Dec 1919)