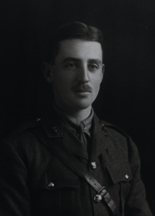 'He was in the retreat from Flanders at Mons, Le Cateau, the Marne, the Aisne, was wounded twice slightly on September 13th at Chassemy, and was sent to a hospital in France. He joined his battery again on September 27th—his wounds hardly healed —and was in the thick of the fighting area on the Aisne, and gave much fighting service since, gaining the tribute from a comrade that "He knows his duty thoroughly, and does it thoroughly, and always does it as if he loved it." He was awarded the Military Cross ‘for conspicuous gallantry on 10th June, 1915, near Ypres, when he was dangerously wounded in endeavouring to restore telephone communication under very severe fire, and had been noted for consistent gallantry, and was wounded on two previous occasions’. He died on July 24th of wounds received on that occasion.' (Malvernian, Nov 1915).
Biography