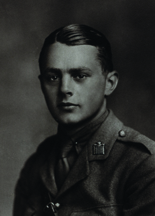 'A boy of sound principle, earnestness of character, and strong common sense, he did excellent service in his house, in which he was very popular. He was about to enter Pembroke College, Cambridge, when at the beginning of the war he enlisted in the Queen's Westminster Rifles, in which after a few weeks he received a commission. He served with his Battalion in France from November, 1914, until August, 1915, when he returned home on sick leave. In 1916 he was again at the front from April until he was, in September, slightly wounded. In January, 1917, he joined the R.F.C., and gaining his Pilot's certificate in April, proceeded at once to the front. He had been promoted Lieutenant in April, 1915, and Captain in July 1916. On April 29th he was sent out on a reconnaissance, from which he did not return. Later it was discovered through evidence of German prisoners that he had, single-handed, engaged five or six German planes in a fight which lasted a full half-hour, and was watched by enemy troops in the neighbourhood with intense admiration for the courage of the Englishman, who again and again attacked his opponents. He appears to have brought his machine to within a few feet of the ground when he expired, his machine crashing. He was buried by the enemy with military honours. His Squadron Commander writing of his last action says: "It was one of the bravest deeds I have ever heard of, and it shows that the Royal Flying Corps has lost a very gallant officer. We miss him awfully in the Squadron both as a Pilot and in the mess. Although he had been with us a very short time, he was very popular indeed, and was already a very good Pilot and showed signs of becoming a brilliant one. He died one of the finest deaths in quite the finest way." ' (Malvernian, Nov 1917).

Wounded in Sep 1916.
Report of medical board 20th Sep 1916:
Service: 25 months
Disability: 'wound of knee'
'This officer is suffering from injury detailed on form A45a attached. In addition he is suffering from exhaustion neurosis brought on by 15 months continuous & arduous active service. At Gommecourt on July 21st his battalion was wiped out, only 150 men remaining after an attack on the German trenches. He has been suffering from diarrhoea, palpitations, headaches, exhaustion, dyspepsia, & insomnia & is subject at times to attacks of nervousness.'
'The board find that this officer fell in a front line trench & sustained a slight abrasion of the knee which has now healed. He is suffering from exhaustion nervosis as detailed in a45 attached'.

Missing 29.4.1917. Next of Kin: A. L. Barwell, The Tower, Ascot, Bucks.
Extract from GHQ 109s: 'Information has been received from a German message dropped into our lines that the above named officer was killed'.
Officer was shot down flying Nieuport single seater Scout A/6745 near Beaumont west of Douia.
'April 29th, about 7pm a British bi-plane engaged 5 or 6 German planes near Beaumont in the direction of Henin Lietard. The combat lasted a full half hour.'