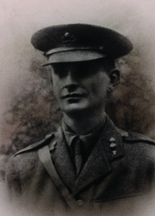 'For twenty years in the 'seventies and 'eighties there was a "Joey" Bell in No. 4; and for the next twenty years tradition preserved the name of "the Bell who was rolled over by the Big Roller." The youngest of four brothers, sons of one of the founders of the firm of Clayton & Bell, well-known for their stained-glass windows, Guy at once achieved distinction as the smallest boy who had ever come to Malvern, and soon established himself as a general favourite. But he was destined to become a historical character. In those days each House furnished a squad one day a week to roll the Senior wicket after breakfast; and one morning during his first summer term. Bell was sitting with several others between the shafts, when the bell rang for Chapel and the roller was trotted off the ground. The jolting of the shafts shook him from his seat, and the heavy roller with its cargo of passengers went right over him, head and all. Fortunately the ground was soft, and so was he. A small blood vessel burst in his head, and that was all. He was allowed to ''feel rather flat" in the Matron's room for a day or two; then he reappeared smiling, apparently none the worse. At any rate he lived happily in No. 4 for many years afterwards. In Australia when war broke out, he came home and took a commission in the Northumberland Fusiliers. After being wounded in February, 1916, he was killed while serving as Lieutenant in the Lancashire Fusiliers, Machine Gun Corps, on April 28, 1917.' (Malvernian, Jul 1917).