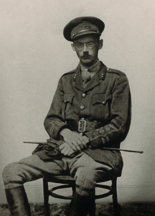 'Never a boy of very robust health, J. C. A. Bell was always a "trier." His determination of character was shown by his persistent and finally successful efforts to get passed for service, and he did right well as a soldier. At school he was prevented by physical causes from distinguishing himself, but he had a good deal of quiet influence, and left a blameless record behind him.' (Malvernian, Jun 1918).