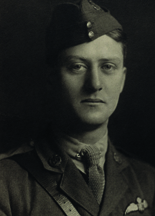 'Frankie Benitz was one of those boys who win popularity from an infectious keenness to be always doing their utmost. He loved Malvern, and has never lost touch with it, nor can his many friendships here ever be forgotten. Flying is exactly what would appeal to him, but it was not for that alone that he hastened back from the Argentine: he knew what he owed to England, and he put himself where he could best serve her. Unfortunately a thick mist deprived her of a first-class airman.' (Malvernian, Nov 1918).
Biography at benitz.com