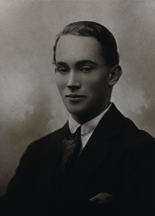 'It was impossible to imagine Vivian Bennett adopting any career in life but that of a soldier. No other profession could have satisfied him; and in him a fine soldier, who promised to go far in the service, has been lost. From boyhood he always showed a fearlessness, prevented by his good brains from developing into recklessness, which was bound to make him a leader of British soldiers. Above all he possessed so bright and cheerful a disposition that everyone loved him. Never to be depressed, and always to see some humour in every circumstance, is a gift worth possessing at any time, but on active service it is beyond price. This Bennett had, and his old Malvern friends—and many a sapper, officer and man—will feel the sadder for his death.' (Malvernian, Dec 1917).

On the 25th Sept 1916, he was buried under the bricks of a house wall knocked down by a shell and sustained an injury to his left knee.

NB: Malvern College in 1919 sent details of the proposed war memorial and the roll of honour to the war office which are now in his service record file.
Biography at Northam remembered