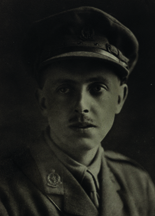 Joined the R.A.M.C. on May 1st 1915 and shortly afterwards left Aldershot for Alexandria. He was appointed to the Hospital Ship "Assaye" and was engaged in transporting the wounded from Gallipoli through the summer and autumn. Subsequently he was attached as Medical Officer to the Berkshire Yeomanry and with them joined the Western Frontier Force of Egypt in the campaign against Senussi. In this he was completely happy and declared that he had at last found the ideal form of warfare.

'Percy Berry was one of a delightfully happy band of friends in No 3. He thoroughly enjoyed life, and he set himself to make others enjoy it also. He was a boy of high ideals and a staunch friend. At Cambridge he acquired a real love for the profession of a doctor, and he readily gave his services to the R.A.M.C. at the outbreak of war. His last act will thrill his many friends with pride. On March l0th, while on duty in Egypt, he noticed a man drowning; he plunged off the rocks into heavy surf with all his clothes on. Immediately a big wave broke over him and he disappeared. His body was found five hours later with a large wound in the head. He was buried on the following day at Barany with military honours. ' (Malvernian, Apr 1916).

The official account of his death stated:-
'On 10th March at Berrani - seeing a man drowning - plunged off rock into heavy surf with all his clothes on to rescue. Immediately a big wave broke over him and he disappeared. Body found later with large wounds, head, apparently Anti-Mortem.'
Guys Hospital