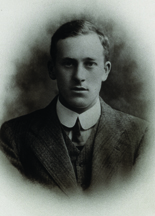 "He was ordered to lead his men out of the trenches across an exposed 300 yards, and was killed instantaneously by machine gun fire whilst cheering them on. Every officer in the charge was either wounded or killed.”
Canon S. R. James writes of him: "When I first came to Malvern in Sept. 1897, one of the new boys in School House was Wilfred Bird. From the beginning of his school career, the most cordial and pleasant relation existed without a break between us. He was perhaps a little mistrustful of himself, and did not always find it easy to cope with difficulties, but he grew steadily in vigour of all kinds, and made many friends. Besides his brilliant career as a cricketer, he was a School Prefect and Head of School House, in which capacity I know of a certainty that he was truly conscientious and devoted himself unsparingly to the highest interests of the school and house. ' One of the best,' he remained humble, kind, upright, and God-fearing to the last." (Malvernian, Jun 1915).
Detailed Biography