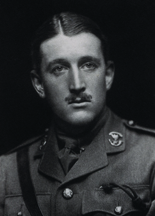 'Type of the healthy, high-spirited, merry-hearted boy, a lover of the open air, and proficient in many forms of sport, John Black was sure to win the admiration of his fellows. But the remarkable influence which he exercised upon those around him at School rested on the more solid foundation of a character which was singularly sincere, unselfish, and, in the full sense of the word, chivalrous. Little wonder that he made a fine soldier and became the best loved officer in his battalion and the idol of his men. He had completed one year at Cambridge, when in September, 1914, he was gazetted to a Battalion of the Somerset L. I. From May, 1915, until his death, except for a short period in hospital in consequence of a wound accidentally received, he saw continuous service abroad. He obtained his company in November, 1915, and since January, 1917, served as Major and second in command of the Battalion, doing, says his C.O., "magnificent work." On April 9th he led the first company in a most successful attack right up to the enemy's third line defences, and was consolidating the position won, when he was hit by shrapnel and died instantaneously.' (Malvernian, Jun 1917).

The John Neill Black Exhibition was founded in his memory.